"Get Your Ticket" Review by Jason Gallagher 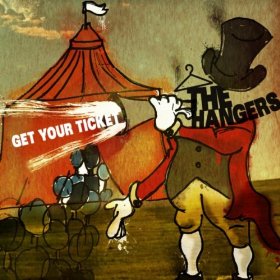 The Hangers, hailing from Montreal, just released their sophomore album ‘Get Your Ticket.’  Busting into the Canadian underground scene in 2009, The Hangers launched their first album ‘Half The Fun’ to a sold out crowd at Savoy du Metropolis and began touring in Ontario shortly after.  Mitch Girio, a veteran in the ska scene, was interested in the Montreal natives and signed them to produce their second album.  Since, they have been invited to play not only on Canada Day by the city of Rivière – du – Loup but McGill University as well.  In addition to their recently released album, they created an acoustic set to give their fans more intimate contact with the band.  With such dedication to their fans, I found it’s hard not to like these guys.

‘Get Your Ticket’ opens up with “Silly,” which I found to be a blend of ska, reggae, and rock with some funky bass lines thrown in there.  I did not know what to expect, having never heard of a reggae band from Canada, but of course they did not disappoint.  “Postcards,” the best track on the album in my opinion, was more reggae heavy than a lot of the others.  It was interesting, though, that some songs were more rock while others were primarily reggae or ska.  The bass lines were also unlike most of those of the other albums I have listened to recently.  A few of their songs actually have French in the lyrics, evidence of their Canadian background leaking into their music.  This is one of the perks of foreign bands making their way into the reggae music scene, a break from the same stuff I hear every day.  “Windy Day” was also something different, incorporating what sounds like a synthesizer, which most other songs lacked.  It paired well with the funk like bass lines that showed up throughout the album.  “Get Your Ticket” has a little something for everyone, mixing elements of various genres in each song.  I did not really know much about the band before I heard this album, and other than Kathcafire, had not come upon many international reggae/ska bands.  Whether you know The Hangars or not, you should give their new release a listen.

I have to say I appreciated the variety represented in this album, a refreshing change from my every day reggae.  For anyone, like me, looking for something new music to listen to, “Get Your Ticket” is the way to go.  I can only assume that The Hangers new release will get the positive response it deserves.