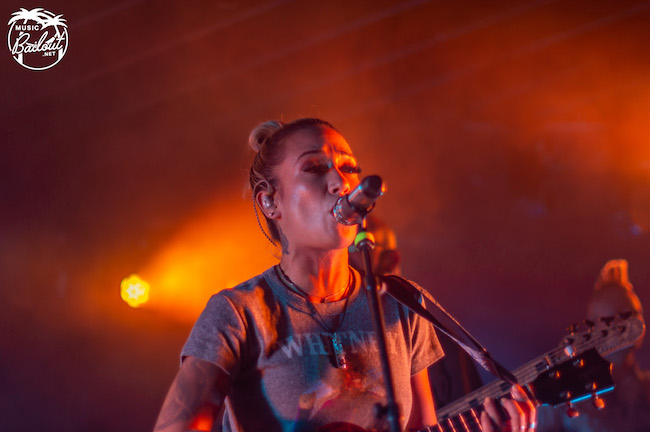 Since her first self titled release in 2013 Hirie has been truly putting the hustle in to her career, and it is paying off by leaps and bounds. With the release of her 4th studio album, Mood Swing, this Hawaiian native has put the scene on notice.  With notable guest artists on the record like Matisyahu, Kabaka Pyramid, Naomi Cowan and Spragga Benz, the album is something special worthy of album of the year. With the release of Mood Swing brings a headlining tour. The Mood Swing tour can be described, from start to finish, as a night of energetic fun and good vibes. Here in Austin at the Scoot Inn the opening acts of Surfer Girl and Ballyhoo! were a perfect compliment to the evening. This would be my first time seeing Surfer Girl and I am already anticipating the return. Surfer Girl, lead by lead singer Carter Reeves, dropped the new album Sunrise last month with many hits that I was excited to hear live. Carter is quite the frontman who takes command of the stage with or without the guitar in hand. Songs like Sunrise and Doghouse off the new album were played (a few of my favorites off the new album). He took command of an audience that arrived early bringing a late show vibe to it. Highly recommend not missing out on this up and coming star.

Ballyhoo! took the stage next and I cannot say enough good things about the band from Maryland that keeps putting out consistent excellent music. I have been covering this band for a long time and one thing that never changes, is that their live shows are a blast. Howie crushes it every single show. You always know you will get your moneys worth when this group takes the stage. They drop blood sweat and tears in to all their performances. A setlist I was more than excited to hear, started off with Message to the World - a perfect opener. Followed up with Middle Finger, having the audience get a little of their aggressive energy out on a Thursday night. Other favorites like Dark Sunglasses, Social Drinker, Gas Station Burritos, and Blaze This Weed, had the crowd become lead singer themselves as they were singing along. Closing out their set was Mixtape, a favorite by all Ballyhoo! fans off the Girls album. Once a Ballyhoo! show ends you feel like you just went through a workout. With as much energy as they put in you find yourself putting that much in when watching.

The night ended with the crowd amped up for Hirie, who kicked off her set with Thief in the Night off the new album. The talent immediately shines from her energy and with the entire band. The horns players, Andrew McKee and Chris Camino, match Hirie every step of the way. They bounce back and forth and do not miss a beat. The set moves forward with Diamond, Sensi Boy and Lost and Found before Blacklist, a song that is a favorite of mine off the new album. Hirie has such an a wonderful stage presence you can easily get in a trance from the performance. Even still, the band is just as up front and center with guitarist Blaine Dillinger, bassist Andy Flores and drummer Matthew Benoit. All are enjoyable to watch making the show transition from song to song, flawless. At times you felt like you were at a dance party with the entire band creating the vibes, especially during Chocolate. The show moves forward with other favorites like I Like The Way You Feel, Sway, Respect, You Wont Be Alone, Bonfire and Boomfire. Closing out the night, Carter from Surfer Girl and Howie from Ballyhoo!, hoped on stage to permorm a classic Bob Marley tune, Could You Be Loved. The collaboration was so fun to watch that you wind up hoping the night would not end. The one thing that will not end anytime soon is Hirie and her continued success. A night as special as that proves she will continue to headline tours and soon be rocking as the headliner to some of the biggest festivals out there. One thing I would love to see for the next tour is a group of her fellow female artists all together for a string of dates across the country. That would be something special. See below for photos from the night as well for a list of more Mood Swing Tour Dates kicking back up after the new year.

Gentleman - "Fight For No Reason"