So much can be said about Common Kings but the first word that comes to mind is humble. The band is about seven years deep under the name Common Kings but have been playing together since at least 2002. They cannot be defined in any particular genre because their musical background and talent will not allow them to be boxed in. Reggae, rock, roots, and R&B are only scratching the surface when listening to them. Not only is the band diverse when it come to their music but their representation of their home lands of Samoa, Fiji, Tonga and Hawaii shine through. Now I used the word humble because Common Kings have already seen some of the biggest stages. From the very beginning, the band was opening for some of the biggest names in music: Justin Timberlake, Brian McKnight, Bruno Mars and Fergie. Within the Reggae Rock community, they have shared the stage with Slightly Stoopid, Rebelution, Matisyahu and, most recently, Sublime with Rome. Even after all that, the guys could not have been any easier to talk to. I even noticed it in the crowd when some of the members, after their set, were chatting with fans and taking pictures as if they were new in the game. They are so eager to put smiles on faces. Their live set is just as powerful. So much of their heart and soul can be witnessed during a Common Kings performance. It was such an honor for me to grab a little time with the boys before they took the stage in Austin, TX at Stubbs BBQ. Oh - and I had to start it off chatting with Mata and Rome about The Los Angeles Lakers’ upcoming basketball season.

Well I want to start off by saying how do you two (Mata & Rome) feel about the Lakers this upcoming year?

[Taumata Grey] We going to start the interview like that. I'm not even prepared, haha. But we will call it The Lake Show 2.0. Especially with LeBron possibly starting out at point out it's like a 2.0 Magic Johnson. Lebron’s been rested and the more people dismiss him they will be surprised. We got Anthony Davis and a good starting squad but if we get Iquidola then I will feel very comfortable for the year.

It's always gonna be a Laker town though correct?

Was the official start of the band at a Barbecue? Is that something where no one even knew each other? Did you all kind of have some acquaintance before prior to that barbecue?

[JR King] Prior to that BBQ it was basically us 3 that knew each other. Myself, Rome and Mata.

[Taumata Grey] A friend that we went to school with at the time was staying with Ivan and mentioned, “Yo you should meet some of the other friends that are living in Newport Beach and having a barbecue. Fourth of July barbecues in Newport Beach are on a whole other level. It was great back then. Yeah. And that's how we all met.

I know you all come from many different cultures and backgrounds musically, but do you remember this band call Natusol? (Showing them a picture of Natusol, this was their name before they became Common Kings)

Did you ever finish the music video for “Work It”?

[Taumata Grey] Yeah haha. We did finish it. But we took it down on youtube.

I was also researching your father Mata. He is a legendary Samoan singer and you and your brothers along with your father had an album under Jerome Trio.

[Taumata Grey] Oh yeah. We've never done an album and he really wanted to do one together with his boys. So that's crazy. He has about 15 albums so yeah that was really special.

And then under the name Natusol you guys even opened up for your father for a charity event.

[Taumata Grey] Yeah we did back in 2002, that was one of our very first big big gigs. 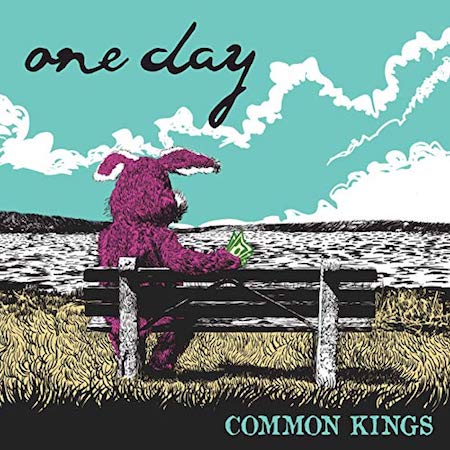 That's interesting because many people think of Common Kings officially starting back in 2012-2013, but this foundation has been at since around 2002. So, you release Summer Anthems and had major success with tracks off the album like Alcoholic, 24/7 and Wade In Your Water.

[Taumata Grey] Yeah Alcoholic was the first big single. And then we had Wade and No Other Love was the trifecta for the big hits that we had. Hawaii really helped put this in the market and put us on the map.

That led to the Justin Timberlake tour. Was it one of those songs that he heard about or was it his management? How did the whole connection happen?

[Taumata Grey] Couple of different angles that we were hitting at. His actual producer at the time heard of us. Rob Knox, and we got into the session with him and, also his manager as well, heard about it and so people were just kind of following the words. We had nothing to lose and everything to gain. Really good opportunity.

Did you feel pressure after the JT shows to keep the momentum going at that time, feel the need to get an album out right away or set up another tour?

[Ivan Kirimaua] Yeah. The momentum died. Because there's a learning experience. To begin our manager Tautua Reed, he's pretty much our fifth member and how that all got down was, I think in 2011, we had a show at Mai Tais and he's a promoter in Hawaii. He saw us and mentioned that you guys should be serious and do originals and stuff. Actually, do something. And then that was when

some of us were jokingly saying you should manage us. Tautua was fresh to the idea did not really know what to do. But if you know him and his work ethic it is unmatched. When he puts his mind to something, and he realizes okay look I don't this and I don't know that so I'm going to bring this person in so that way I can learn. So, we brought in others who with their help plus with the kind of people we are, people tend to stay because they like us. We're likeable, haha. So, after that Justin Timberlake tour I think it just became a story. That's part of our history. But as far as like any kind of momentum directly or you know it was a shock value. A ton of hype from everyone excited saying you just toured with Justin. We still had to come back. Go back to the drawing board. Figure out what our plans were.

This is when Hits & Mrs. comes in correct?

[Ivan Kirimaua] Yeah. So, Hits & Mrs. if you listen to the songs on that and Summer Anthems and compare that with our One Day EP, we definitely went through a few transitions. Growth, finding our way and finding our sound, because we all come from different backgrounds. And it’s taking a little bit longer than we expected to release some new music, but we've got some pretty amazing stuff we are about to release.

First with the latest EP One Day you land Mayday, Matisyahu and Kat Dahlia. Was the plan always to have guests on this album or did the prior tours set this all-in motion?

[Ivan Kirimaua] That kind of happened organically. We talked about it for sure. Then that conversation first turns in to a tour and you end up really liking the guys you are on the road with. Which basically just lead to just getting them on the record.

Is that going to happen with his new record? Anyone from this tour going to be on the new record?

[Taumata Grey] Yeah. It is definitely possible. A lot of talk like that happens organically and you build relationships on the road.

The new album is in the works and Common Kings stick to no particular genre. I still want to ask what kind of direction do you have planned for on this upcoming record? Is there an album concept or song to song?

[Ivan Kirimaua] There's definitely a theme. It’s a split from the Summer Anthems to now. We're getting more conscious in the things that we deal with on a daily basis and what is going on around us in the world. And we're addressing that but sonically our sound is still reflective of all of our taste.

Is the album already recorded?

[Taumata Grey] We have a lot of tracks set and ready it’s just getting back and completing everything.

You guys have been on the entire Blessings tour so far, and it is wrapping up in a few more days. When bands swap out mid tour (SOJA/Michael Franti) does that transition make it rough for a few days or was it pretty smooth?

[Taumata Grey] Yeah, we've toured with SOJA and the boys before. Yes, it was cool. None of us have ever been with Michael. Just a totally different vibe. But the next few shows after Michael started up, we got acquainted to it, so it was cool. These are two way-different crowds though, between Michael and Sublime.

What part of a tour this long is more exciting? The front-end, the excitement and buildup or the back-end, coming back home and being back with family?

[Ivan Kirimaua] Coming home is definitely a highlight. But every city has its own special dope flavor which make it extremely exciting. We hit cities that we've never been to, and you have more than expected fans singing your songs - which is special. With no radio play it is word of mouth or from people who have been to Hawaii. So, a lot comes from the I Heart Radio station, or you've heard of us through a friend.

[Taumata Grey] There's a lot of military as well. The best is when all these fans who have never heard of us and then come up saying “Yo we don't know who or what the hell you guys are, but you just blew our minds.”

Let’s talk about the current situation going on in Hawaii. What are your thoughts about the hot topic issues regarding cultivating the land in the name of science?

[Ivan Kirimaua] There's a timeline from 1964 when the University of Honolulu first got together and drafted a proposal to get a telescope up there. A lot of promises were made back then. Over the years something like 13 telescopes are up dating back from 1964 to 2015, I believe. Every time they went and revisited, they fell short on every single promise. Not one promise was kept. All kinds of things that they had in the agreements that we not met. The land is sacred this we all understand and know. But there's so many more layers to it. People live off the land as well.  Even from the water source to the fish, it’s a whole eco system.

So many of these guys have yet to keep their word so why should we even let them to continue to build. It’s absolute asinine to let them add another one when they've got 13 telescopes. And not one promise has been kept. The only good thing about this is it's really bringing the community together.

Many big names are heading out there as well in support. Is this something you guys may do at some point post tour?

[Taumata Grey] Hopefully at some point. But we've been definitely supporting how we can by just giving awareness to everybody.