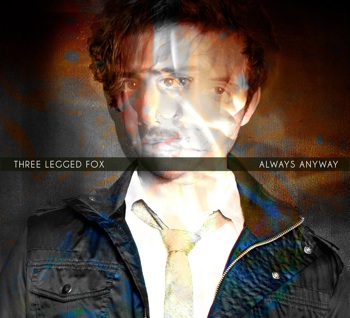 Three Legged Fox return with their third new release and do so with a bang. Always Anyway is a departure from the reggae-tinged sounds of their previous albums and an album which propels the band into a rockier, rugged and harder sound.

It has long been said that Three Legged Fox stood out for being a different type of reggae-rock band and this album doesn’t just confirm that assessment but it blows it out of the water. This is an album no other reggae-rock band in the scene today would have been able to make.

The musical range the band goes through is clear, heavy atmospheric wall of sound guitars, melodic vocals and an uplifted tempo pervades through the album.

The self-produced album opens with the track Get out Alive and it’s explosive start to the album, setting the tone for the rest of the album. Heavy guitars crash through the speakers.

Let you Down is the band’s first single and it’s a tune which explores the basics of a relationship with lead vocalist, Kyle Wareham, singing to a girl “Do you think for a minute I would let you down?” The backing vocals also come into their own on this track.

Grace (Here with You) is a beautifully crafted song, with a delicate opening, soft vocals and a gentle understated approach by the boys.

The band gets political taking aim at Wall Street on Run for your Life. As drummer Kory Kochersperger said during a recent interview with Musicbailout the band was politically engaged but they don’t stand on one side of the line.

“But we’re not going to build an audience willing to give us their ears and their time; and then just sing to them about smoking weed and chillin’ on the couch. “So when we deliver songs that are rooted in politics or are socially motivated, it’s much more just a viewpoint, it’s the way I see something through my own eyes.  And the song is just me talking it through,” Kory explains.

In the same interview Kory calls the album “an significant departure” for the band from the last two albums, and he is right, Three Legged Fox have stepped up the tempo and delivered a heavier sound for fans, a departure and a move towards the alt-rock scene.