"The Supervillains & ...." Review by Aaron Solomon 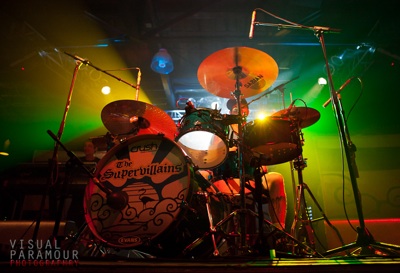 There is always a fun time to be had when The Supervillains are playing a show. But when you add The Movement, Pacific Dub, Hor!zen and D.P. to the bill you have a NASTY night of reggae rock.

After killer sets at 311 Pow Wow Festival, The Supervillains and The Movement effortlessly packed Firestone Live in Orlando, Florida. The night started off strong with a full all-ages crowd bumpin’ for Gainesville, Florida based hip-hop artist D.P.  This guy surprisingly spits well written rhymes with catchy choruses, backed by a very talented live trio. D.P. had a limited amount of time on stage. He played “Something to Say” and “Letting it Go” but his talent definitely shined through the dark venue when he closed with his single “Hollow.”

D.P.’s hip-hop style was the perfect opener for the night’s other home grown band, Hor!zen. The Orlando crowd that packed Firestone Live was very excited for their local up and coming reggae rock band. There seemed to be a large portion of the crowd that came out Saturday night because of Hor!zen. This band has been working hard and touring strong around Florida lately. Hor!zen is one band not to miss when they come through your town. If you have heard Hor!zen before, go see them again! They have created a nice new sound for themselves, by adding Leilani on vocals and guitar and Dominique on keys and sax. The band has really stepped their sound up to another level.

Hor!zen put the crowd into that reggae mood with their “dirty south dub rock.” They opened with the chill but poppin’ reggae vibes of “The Life”. The crowd really got going with their new single “2000 Miles,” a cleverly written tribute to Sublime’s Bradley Nowell. The middle of the set was well played with a new version of an older song, “Camel Cigarettes,” from their EP “Bottom Out.”  Leilani sang a strong chorus featuring sax and keys instrumentals. Hor!zen played another new song, “Pants Hang Low”, this song is sure to be the bands next new single. Half way through “Pants Hang Low” D.P. came out for a few verses and really turned it up, making it the definite the crowd favorite of the set. Hor!zen ended the set with another new song, “Gangster,” and then “Put It in the Air.” The set was short but sweet. Hor!zen is THE band to keep watching!

The timing for this concert was great. The Movement and Pacific Dub were in Florida on the national 2011 Easy Love Summer Tour.  The Supervillains were in Orlando after their national tour, and they all paired up for this crazy concert. Pacific Dub opened the “Easy Love Tour” segment of the show. With strong guitar riffs, their sound was completely different from the music earlier that night.  They played a good set and by their last song the house was packed and ready for The Movement.

The crowd was familiar with the ‘Villains so The Movement really seemed to surprise the crowd with their fusion of hip-hop and reggae rock. They played 14 songs, 4 of which were new. They opened with a new tune, “Mr. Policeman,” and also played “Lonely at the Top,” “Easy Love,” “Feelin’ Goes Away,” and “One More Night.” They killed it, closing the set with their single “Set Sail” and then melted faces with their last song “Down Down.”  The Movement has a great live set and the addition of keys and new material steps it up by a lot. They are very impressive musically, and have grown to be a driving force in reggae rock. Jordan Miller murders the mic, Gary kills the drums and Jay Smiles plays a mean reggae bass back beat. This was the second band of the night to be on a whole new level. Be excited for the new album! The full set list is below:

Mr. Policeman
Say Hello Green Girl > No Way
Throwdown
Lonely at the Top
Scream
Mexico
Easy Love
Feelin’Goes Away
On Your Feet
One More Night
Set Sail
Down Down

The last set up and sound check was over, after an already great show, the band everyone wanted to see was finally walking on. The Supervillains are one of the best live touring bands in the scene, and the Orlando crowd was more than excited for the show. It was good to see the ‘villains using the entire stage, it was packed! They performed like a top notch act that could play arenas. In front of a huge backdrop, with matching side stage banners, were Dom, Dan and Skart. The three were backed by a keys, trumpet, and sax player. The Supervillains sounded great with the full cast.  They opened with “Drinking Tonight,” kicking the crowd into gear. Then they got the pit going with “Ex-girlfriend.”   With little to no success security tried to jump in to slow down the raging circle pit. Next, was the bands tribute to Orlando with a Prince Buster Cover, “This Town is Too Hot.”

It was an excellent set, with a nice mix of older and newer songs.

A few moments really stood out in the middle of the set.  D.P. came on during “Free.” His rhymes were a perfect match with The Supervillain’s chill reggae tones. Hearing hip-hop in a ‘villain’s song was different, but it is something they should add more of. During “Mary Jane and Jagermeister” Do