Downtown Austin TX has had many venues come and go the past decade. With the city growing in population and downtown feeling the most boom, iconic concert spots have been closing left and right. Stubbs is still standing strong and has been delivering live performances from big names across the music spectrum. They have even hosted countless SXSW acts which at times are nearly impossible to get in to. It was also there that I first saw Pepper live, opening up for Slightly Stoopid in Stubbs’ inside venue. It must have been in 2000 or 2001 but feels like yesterday every time I see a show there. Needless to say, I have seen countless shows at the venue and the Live From Paradise Tour is at the top of my list of favorites. 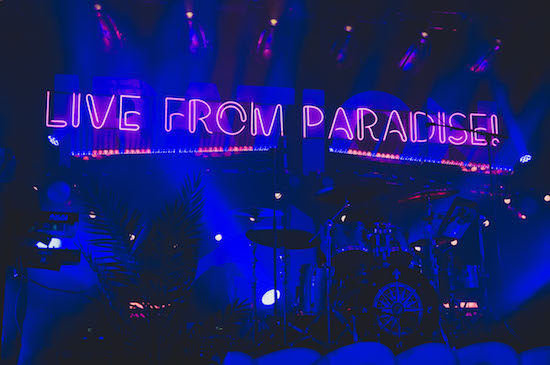 The lineup for this tour can easily be mistaken as a festival tour, with heavy hitters such as Iration, Pepper, Fortunate Youth, and Katastro. It’s proving to capture that festival vibe in a smaller setting at Stubbs.

The first to perform was Katastro, from Tempe, Arizona. This band is the perfect act to open the show, with elements of reggae rock, funk, blues, and hip-hop. Vocalist, Andy Chaves, really knows how to grab the attention of a crowd and make the stage his own. A number of tracks off the band’s most recent album, Washed, were performed, including Fake Smile, Nirvana, and Daddy’s $$$. The newest single, Your Girl - released the day before this show, was also cranked out by this explosive band. You must see it live to get the full effect. The audience was completely engaged through each song and you felt the energy really starting to rise, setting a tone for the night.

The next act is one you have to do some pregame prep for, have your bowls packed tight, joint rolled right and blunts prepped nice. Honestly, when seeing a Fortunate Youth show you almost feel like you should have some help from Mary Jane.  If you are able to keep up with lead vocalist Dan Kelly, then consider yourself a champ. Every time I see this band live, I am impressed by his ability to stay composed and remember all those lyrics. With a Fortunate Youth show it almost seems criminal not to be in the same mindset as the band. When the band played the fan-favorite song, Burn One, during their set you could see mini clouds disperse though out the crowd. If you don’t smoke, you were getting high one way or another. If you have yet to watch this band perform you must do yourself a favor and pay attention, so much connection is seen during the set. The instrument changes are so fun to watch and the talent level from each member is off the charts.  Watching Travis Walpole to Corey Draskovich make seamless transitions, all while Dan Kelly is belting out, is a thing of beauty.

Next up you can almost hear Michael Buffer in the background say LET’S GET READY TO RUMBLE!!! A Pepper show is straight up an experience to remember. The energy they bring each and every time is consuming. When the band arrives on stage, the anticipation sets in and you know you are about to experience a kick ass show. Once you hear the bassline start, a Pepper fan automatically knows the first track to start the show is B.O.O.T. – it’s the perfect song to get the crowd going. Also, make sure you keep your eye on Pepper’s drummer, Yesod. He is zoned in every time and his engagement with the audience is just as awesome as the two front men, Bret and Kaleo.  Pepper released a new track the previous week titled Warning (ft. Stick Figure) and it was performed during the set. A few guests arrive on stage but let’s leave that unknown for the folks who enjoy surprises. Other fan favorite songs included Stormtrooper, Fuckaround, Ashes, and Too Much. A band like Pepper, in my opinion, is always hard to follow. But make no mistake, Iration is going to have no problem.

Headliners Iration, have come through Austin a number of times since the band’s inception. I personally remember seeing the band play a SXSW stage many years ago when they were first starting out. It was a small crowd back then, but of course Iration, crushed it and that is when you saw the seed planted in this city. Fast forward to 2019, and the band is headlining yet again one of the most iconic venues in Austin. Once the band walked on to stage and the lights came on it truly felt “Live From Paradise”.  Lead vocalist, Micah Pueschel, starts the evening off with Time Bomb and Turn Around. The good vibes from bassist Adam Taylor are felt through the night with a smile that would not stop. It is incredibly infectious as the band continues the set with hits off their latest self-titled album, Already Gold and Stay the Course. (New video released, click here to watch). The incredible lighting really highlights all members of the band including guitarist Micah Brown and keyboardist, Cayson Peterson. The night continued with many more songs including Broken Promises, Wait and See, Summer Nights, and Press Play to name a few. You almost get envious watching the band play on stage and seeing how much fun they are having. You can tell they truly love what they do, and it shows during their set. As the band closes out the night, with a stage full of guests, you understand why the tour is called Live From Paradise. You may not have sand in your toes, but you will leave the venue with a full heart and soul of the music only a place like paradise can provide.