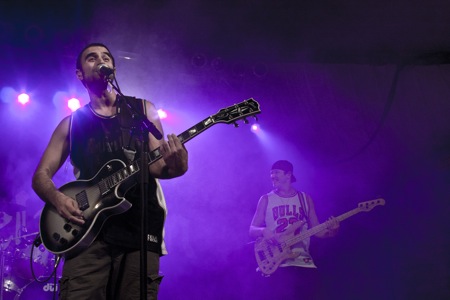 A great night is almost a guarantee whenever Rebelution rolls through town. After having to postpone their Austin date during their Winter Greens Tour, Rebelution came back as promised and had a packed in Stubb’s crowd dancing all night. After an impressive high-energy performance from the openers, Subrosa Union, Rebelution took the stage to a roaring applause. The crowd was ready and once the night began with “Green to Black”, the perfect song for the crowd to set the mood to, and sure enough they did.

Following their opener they proceeded to play “Lazy Afternoon” and “Running”. By this point, Rebelution had managed to have the entire audience bouncing to every single beat, never letting up. The transition after “Running” was flawless as Eric lead the attack straight into “From the Window”. After this, Rebelution performed their new song “So High” and the crowd ate it right up. With the crowd still in the palm of their hands, Rebelution would go on to play fan favorite “Safe and Sound” followed by “Change the System” and “Otherside”. The crowd-friendly singalong, “Bright Side of Life” brought a smile to everybody’s face and managed to keep the audience looking alive. Following “Bright Side”, Eric introduced us to yet another new song called “Sky is the Limit” which blew the audience away.

Rebelution played another new track followed by a Don Carlos cover in honor of Cinco de Mayo. At this point, Rebelution had given the audience more than their money’s worth in terms of quality and energy. Marley’s dancing never let up for a second and everybody on stage seemed to be in their zone. The crowd showed their appreciation with an extended applause after “Nightcrawler”. Every second Rebelution was not playing was anything but silent thanks to the appreciative crowd. After a few more songs they would continue to play “Feeling Alright” and leave the stage. As soon as they put their instruments down, the crowd was screaming for more, and more is what they got with an encore performance of “Out of Control” followed by the last song of the night “Attention Span”.

A nice full set, tons of energy, a few new songs, and plenty of crowd participation on a beautiful spring night led to another great live performance. Seeing Rebelution live was the perfect way to get rid of stress right before finals week in a college town.  As these guys continue to grow, they only seem to be getting better and better. No matter how many songs they could’ve played, they always seem to leave crowds wanting more. Unfortunately, this amazing live performance would have to do for ATX until next time they come around.