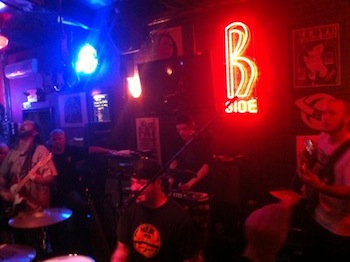 Friday night was a wild RAH RAH RAH Records party with The Supervillains and Kayavibe rocking the Beachside Tavern stage.  Before heading south to kick off the Southeast Skeet tour with the legendary Fishbone, The Supervillains warmed up for New Smyrna Beach in true 'Villains style.

Around  10:30 that party started with RAH RAH RAH Records' newly signed band Kayavibe. It can't be denied that Kayavibe is the perfect opener for The Supervillains. Their dance party reggae rock sound  matches well  with The Supervillains' own fusion of sounds.  With their party anthem vibes, Kayavibe pumped up the crowd with songs off of their new self-titled album. The band opened the set with the upbeat songs "Turn Around" and" Bounce" to get the crowd moving. Then they did one for the moms, an excellent cover of Hall and Oats' "Maneater." Kayavibe kept  the tunes flowing with the mellow sounding "Living Single" and "Sticky Situation." They played "Piano" and went right into a cool cover of "Five On It," and then ended the set with the regional favorite "East Coast." it was a killer set.  Kayavibe is a band that is forcefully  emerging on the scene.  Their laid back sound combined with their energetic live performance, make them a lot of fun to watch and listen to. Check this band out, they are one to watch. 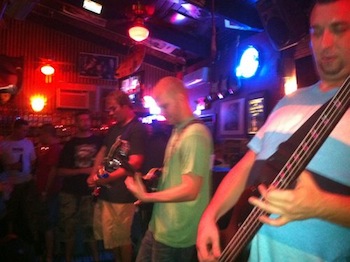 Fans always go nuts for The Supervillains. This show was no different.  With their extensive catalog of popular songs it is no surprise that The Supervillains command such a following among reggae rock fans.  On Friday night they played yet another great set, and kept the crowd raging for a solid two hours.

It was a smaller venue, so it should have been harder for the crowd to really get rowdy. But they did!  After The Supervillains covered Sublime's "40oz to Freedom," they picked up the tempo and went right into "Ex-girlfriend." During which someone slammed head first into the drum kit, knocking most of it over.  The spill didn't stop the band though, they kept on going, and destroyed.  Some of the highlights of the set were, a sing along of "Mary Jane and Jagermeister" that opend with a cool into, a hilarious birthday song,  a slowed down dub sounding version of "The Pit," and the set closing cover of "Johnny Too Bad." It was an awesome Friday night show, and tons of fun. The Supervillains are one of the most fun and entertaining bands to watch perform live. When they come into your town, don't miss the good time!