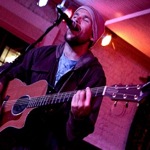 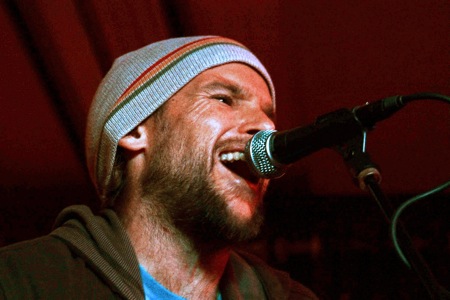 One man, one guitar, one voice, and one room is all it took for J.K. Livin artist Mishka to create musical magic at Lamberts Barbeque in Downtown Austin.  Stepping into the high-end restaurant on the corner of 2nd and 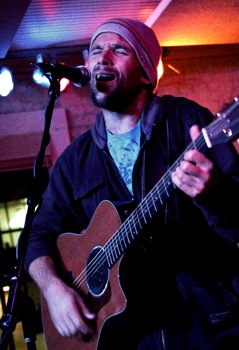 Guadalupe was a bit of an unexpected surprise. The upstairs bar where Mishka was playing was well-light, and beautifully decorated and added ambience of the acoustic set Mishka was about to play.

By the time Mishka took to the stage, the room had filled up with a business casual crowd. All the tucked in shirts and dresses seemed a little strange in contrast to what the actual performer was wearing. Mishka opened his set with “Long Road”. During his first couple songs it became clear that some the crowd thought their conversations were a little more important than the music, but by the time Mishka began to play “Above the Bones”, most of the excess talking had disappeared and Mishka’s beautiful vocal melodies along with his relaxing strumming began to captivate the crowd.

Before performing “3rd Eye Vision”, Mishka made a plea for the audience to take better care of the earth that unfortunately did not seem to even faze the crowd. The song itself was well received and got the crowd ready for what seemed to be the fan favorite of the night “Homegrown”. The whole crowd sang along and the only thing that could have made it any better would be if Willie himself showed up. After “Homegrown” the crowd was hooked and Mishka just kept on giving. Soon after, he took to playing “Lonely”, one of my personal favorites. 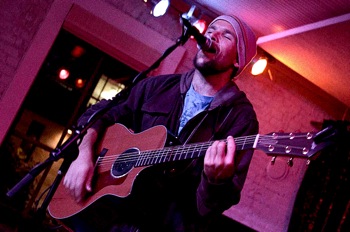 As the night drew on Mishka continued to keep the crowd at his fingertips. As his set began to draw near a conclusion after playing such songs as “Love and Devotion”, and “Coastline Journey”, as well as fan-favorite “Give You All the Love”, the sad realization that the night soon had to end came around. It was an intimate and special night upstairs in that restaurant seeing someone as talented as Mishka and I believe everyone left Lambert’s feeling like they got more than their money’s worth from the soon to be superstar.

Although a different venue and a little more promotion for this show could have made the night a little better, Mishka managed to pack an entire room for an acoustic performance. His blend of strong and interesting melodies and poetic lyrics made this acoustic set that much more special to see and really showcased how much talent he has. Mishka is an amazing artist and performer with a message and more than enough soul. After seeing what the man is capable of live, I have made myself a promise to never let an opportunity to see him again pass me by.