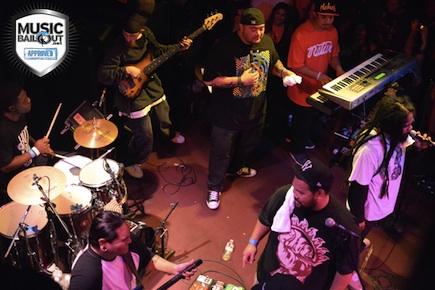 It was certainly hot in the New Parish that night as sweet reggae music rained down on the sold out crowd there to see J Boog and the band Hot Rain.  Both the singer and the group brought the hot fire straight from the islands.

Hot Rain opened things up, getting the crowd swooning to their fun, up beat Hawaiian style reggae.  What struck me most at first about the band was how flawlessly they switched off on vocal duties throughout the set, while of course hitting some Motown-worthy harmonies.  Touching on subjects like love, island life, and keeping a positive outlook in this crazy world, the band got the crowd singing along and getting down to their steady roots riddims.

A little known fact to first timers in the crowd, lead guitarist and front man Carl, was actually rocking the bass that night.  I ran into him and J Boog right before the show and apparently Hot Rain’s bassist had to return home to Hawaii for family reasons.  Carl didn’t heasitate though, he just told me he was gonna rock the bass and everything would be fine.  These guys sure do stay cool when the heat is on!  Needless to say, Carl was perfectly synced in the pocket while also hitting his vocals.

Up next, J Boog brought the fire with most of Hot Rain staying on stage to back him.  The crowd went nuts when instead of the usual stage entrance, J-Boog emerged from audience and jumped on stage as the band kept right on grooving.   With three backup vocalists, it almost looked like a barber-shop quartet on stage.  J Boog doesn’t just hit the harmonies though, he throws down with his own brand of reggae-rapping, mixing the sweet vibe of the island sound with a hard-edge that comes from his upbringing around hip-hop artists in the Compton area of Los Angeles.

J Boog and his crew took the sold out crowd on a journey that included classic roots styles, reminiscent of Gregory Isaccs R&B influenced reggae, some modern hits like “Ganja Farmer”, and J Boog’s new single, “Let it Blaze”, a perfectly blended mash-up of deep roots riddims and hard hip hop beats.   The 9-piece band kept the crowd on their feet all night, keeping the energy high and bringing guests vocalist Lion Fyah up on stage to whip the crowd into even more of a frenzy.  But what stood out most to me is the great musicianship and professionalism of the whole outfit.  Everyone was locked in and on point, never loosing focus on the music, but all the while connecting with the crowd and having a good time on stage.  So far this was my favorite show at the New Parish, a great up and coming venue in downtown Oakland.  The music was choice, the crowd was Irie, and the vibe was just right.