"Self Titled" Review by Nick Shishkowsky 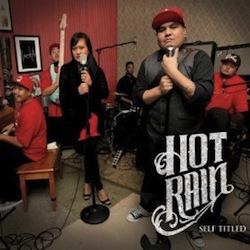 Now, there are plenty of island reggae bands out there with a similar sound but Hot Rain has been in the game now for quite some time honing their craft and their debut LP “Self Titled” stands out above a sometimes seemingly crowded Hawaiian scene. Just to be clear, the album is not a self titled album, that’s the actual name of the LP “Self Titled”, which I found entertaining. This band doesn’t take themselves too seriously and it reflects in the feel good music they make.

With an impressive 15 track release by Hot Rain, this LP reminds me of the innocence and peacefulness that draw most people to reggae music in the first place. The bang for your buck is amazing also, with most bands releasing 10-12 song albums with a few good tracks, Hot Rain is a little more ambitious and it pays off. There is very little filler on “Self Titled” if any. I found myself enjoying the album from beginning to end starting with a powerful stepping track We Dem People. This track really showcases the band when they are allowed to just let loose and incorporate a little rock into their island roots sound and definitely makes a great first impression.

The next song that surprised me was Heavyweight Love. I commend them for this track and didn’t even realize it was a song about loving bigger girls until half way through it, it was that well written. This one is sure to make you smile.

Songs like So Pure, and Take A Breath really stand out in the first half of “Self Titled”. Take A Breath being one of my favorites with a slow groove and some dub mixed in, however the song doesn’t drag or get repetitive like so many other slow dub grooves do.

Get Together is a nice mix in the middle of the LP giving your dancing shoes a little break. It’s an acoustic track with a little piano that really showcases the lead vocalist and the harmonies of the band. The lyrics are very well written calling for us to lay down our weapons and stop fighting each other. I love when bands throw in tracks like this and will likely be a favorite of most who listen to the LP.

The rest of the album is really easy to listen to, delicately twisting R&B and Soul together into a Reggae smoothie for your ears, tasty. The vocals pop, the horns and keys accent each other very well and the guitar, bass, and drums are locked in tight. A lot of the songs on the LP specialize in love but they definitely branch into some more spiritually conscious roots lyrics.

The last track Long Road ends “Self Titled” like the LP started, aggressively. Hot Rain is singing about being an example to others and almost giving a warning to fake people. I would LOVE to see them write more songs in this style. They left me satisfied with 15 hot tracks, but also wanting more at the end.