"In These Times" by John Larsen 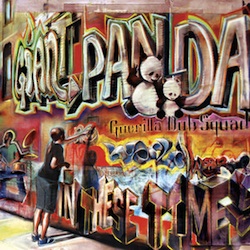 In These Times is not a dub remix album. I almost find it hard to call it a follow up, even though their last album, Country, was just released short while ago and they feature some of the same songs. After listening to both thoroughly, it seems to me that both albums are born from the same feelings and emotions: the life on the road, being away from loved ones, and the current states of economic insecurity and corporate greed. From what I can tell, Giant Panda saw two paths they could take to get these ideas across, and instead of choosing just one, the true road warriors said, “Fuck it, we’re doing both.”

I’ve heard this album referred to as the “dub version” of Country; however, I find that the album has a definite roots vibe to it. Sure, they get spacey dubbed out here and there, but the full lyrics and harmonies still command your attention for most of the time. The bass lines drive, the horn parts (courtesy of John Brown’s Body) hit in just the right spots, and the drums keep it rock steady the whole time.  In my honest opinion, this is the best roots reggae album this year. Taking essences from greats like Steel Pulse, Morgan Heritage, and Black Uhuru, but adding their own modern take on the genre, the group has created a reggae album that is reflective of this point in history, yet also timeless in its sound.

In These Times starts off with a song not featured on the last album called “Change You,” which instantly sets the tone with a great roots reggae line played together by the bass, keys, and guitar, while a wailing harmonica gives the only musical reference to the style of the previous album done on acoustic instruments. The rest of the album is a mix of new tunes and a few tracks from Country redone in traditional Dub Squad fashion.  However, they don’t just dub out the tracks -- you can tell that they made sure the music complemented the lyrics and sometimes they change the vibe all together.  On the song, “Love You More,” the band takes what was a soft acoustic tune and turned it into a dark reggae jam, with a hard-driving bass line and one drop. The clavichord sound backs up the bass line, adding to the depth of the song, while echoing guitar licks create a sense of mysteriousness.

While I love the new takes on their songs from Country, some of the songs specifically made just for this album are some of my favorites.  One of the “dubbiest” is the track “Next Best Explosion,” where airy vocal harmonies meet up with Dylan Savage’s wailing guitar. “Pockets” is another track that really spoke to me. The song sums up our current disdain with Wall Street perfectly with lines like, “It’s a war of cultures, microscopic precision,” referring to the digital age we’re in and “educated fools from uneducated schools, they been fillin’ up their pockets,” referencing the revolving door of elite prep schools to elite colleges to elite corporate jobs that creates the culture of greed we see in corporations today.

“Moonshine,” another track not originally introduced on their last album, is a classic, soul-moving, roots tune. The lyrical line from bassist and lead vocalist James Searl shows the folk influence from the last album with moving harmonies from the rest of the group. This song just makes me sit back and take a minute to appreciate the music.  I can’t help but be completely drawn in by everything from the Motown reminiscent basslines to the smooth guitar riffs and folksy vocals.

In all, this is a definitive reggae album, by which I mean it’s going to define the sounds coming out of the roots/dub scene from here on out. It’s both a modern take on reggae and a homage to the classic roots of the genre, few groups can pull both off flawlessly. Giant Panda Guerilla Dub Squad has been hitting the road non-stop and coupled with this solid album, expect to see them blowing up even bigger. I have to agree with the bands own statement about the release, "This is the Giant Panda album that you’ve been waiting for. "