I had the pleasure of attending House of Blues Anaheim on this beautiful Earth Day. But, don’t expect just a bunch of hippies smoking pot because of reggae music at the HOB. These bands came to ROCK!

I’ve been looking forward to this concert for a few weeks now, I show up to the venue, to my surprise at 8:30 there is a line outside, should have known due to the “all ager rager” (Don’t get me wrong those type of shows are great for the bands and add a lot pure energy). 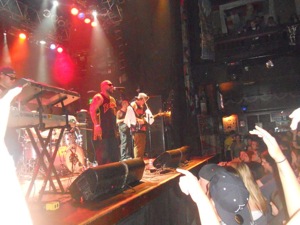 So, I missed the first band, The Holdup.  I’ve heard nothing but great things about this group and they just released their album, Still Gold, which is currently #1 on the Reggae charts of ITunes, congrats boys!

Needless to say I was late because mama needed to get her margarita on! No better way to enter a live music venue and have my margy in hand while the Mike Pinto Band is on stage!  I’ve never heard any of his music before (but have heard about Mr. Pinto from a few East Coast homies). I got a great vibe from him and the band. I remember rocking out to one song with quick, sharp drum and guitar solos. A little sublime vibe for a few seconds, but then Mike turned it into their own with original rhymes and wait for it, yes horn section (ladies you know exactly what I’m talking about!), stellar performance.  I see Mike Pinto Band emerging from the underground music reggae scene indefinitely.

Ahh, now time for my boy’s Seedless, ahh yes I’ve been attending their shows and raging with these guys for over the past year now. I’ve seen so much growth and this Friday evening proved to be no different.  The crowd was rowdy and ready by the time Seedless came on... packed house for sure! Front men, Casey Sullivan and Matthew Liufau, know how to get a party started, preferably a 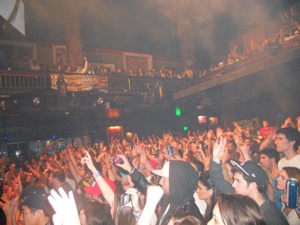 “Reggae Party”, one of my favorite songs off of the Twisted Roots album. With their wide variety of influences and diversity within the group (from sweet island sounds of Matthew Liufau’s voice to the rocker vibe with tatted Shay Pino on drums, this band gets it done! What I liked the most about their set was they freakin’ brought the rock side out tonight! I was really feeling the rock n roll coming from bassist, Grant Rivera and vocals/ guitar, Casey Sullivan.  Later, for a more sensual side of the show, Juan Rios (keys/vocals) sings and plays their ultimate panty dropper, “I Want to Know”. The crowd at this point is swaying their arms in the air and singing along to the smooth melodic chorus. Irie!

HEADLINERS: Iration
Now the highly anticipated Iration performance is just around the bend. I’ve seen Iration before, but on this evening, without the influence of Mary Jane, I pondered if I was going to be as mesmerized as I had been seeing them while high as a kite at last year’s Cypress Hill’s Smoke Out Festival. I was in luck!!! Front men Micah Pueschel (guitar/vocals) and Kai Rediske – (Vocals/ Percussion) proved to be very personable and crowd engaging. (Even took lots of photos with fans after the show).  Iration has a new album out called, Fresh Grounds (download now!) and I was pleasantly surprised and pleased to hear and great mix of old classics, my old fave, Fallin’ (even though the lyrics make me kind of wanna gag haha, it’s a beautiful song instrumentally) to new tunes, “Summer Nights”- a new fave and “All This Time” – glad they finally put that song on an album.  The new songs off of Fresh Grounds have more variation in lyrics, style, and a much “tightened up” Mr. Joe Dickens on drums, slayin’ it! Changes with their second album are going to keep the fans coming back for 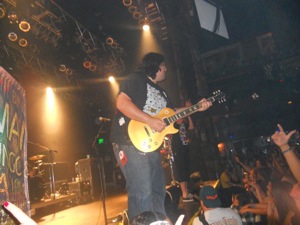 more and more!  I heard from Micah after the show that it was a SOLD OUT event for them at the HOB Anaheim- that’s over 1,100 tickets. I can see why there is beautiful progression from this band.

Alright enough about the show prior to the part that most of will only remember- as we look back through of “slideshow of life”: The Iration encore. When Mike Pinto Band joined them back on stage for UB40’s “The Way You Do the Things You Do”. Definitely recommend Youtubing that encore!!!  I almost died (in all the best of ways). Micah, Mike, and the Horn section (yes blonde hottie dread guy, you.) KILLED it! You could tell that Iration had been touring with the Mike Pinto Band because of the endless cheers on stage and the unity within the two groups.  So harmonious and made it me love the bands and that song even more.

With all the unity and love these bands all had for each other, I will be a life-long supporter of the Irie music scene! Plus you can’t ever go wrong with some dreads ;)