Dub Is A Weapon 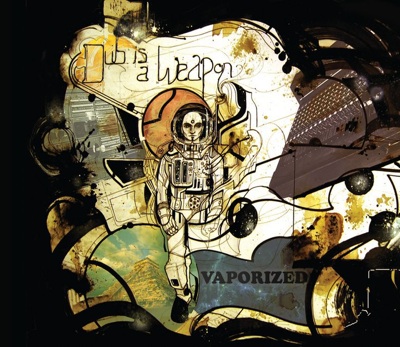 Dub Is A Weapon

Dub Is A Weapon, the brainchild of Brooklyn's Dave Hahn, is releasing the long-awaited "Vaporized" on April 26th and I must say, I've listened to the album a few times through and have picked up on different elements in the recordings each time. The aptly named 5-piece group from New York brings an edgy and aggressive sound to their slightly more uptempo brand of dub music that sets them apart from many others in the genre of modern dub. Much of what you hear on the album doesn't stray too much from the band's live performances and it's this ability to create "live" dub as a band that previously earned them a North American tour with the likes of dub forefather Lee "Scratch" Perry.The album kicks off with "Turbulence" and the listener is immediately introduced to  hard driven distorted guitar licks that reemerge throughout the album in the form of well-timed solos, muted bass lines and accompaniments to the horns. Though each musician is clearly skilled in their own right, DIAW stay true to original tenets of dub,  leaving plenty of space for the tightly played drum and bass to create a steady and reliable groove for all other instrumentation and Hahn's well-timed and intelligent live mix and effects to build upon.

Another key aspect of the album that becomes readily apparent is the work of saxophonist Maria Eisen. In a genre where vocals are many times absent from the song, other instrumentation may play a larger, more impressionable role and this is just the case with the sax throughout "Vaporized". Be sure to check out the mesmerizing and soulful solos found on "Turmoil" and "Persistence".  Larry McDonald's percussion is another area in which the album again establishes itself as a cut above many in the genre. The average listener may not pick up on the many different percussive elements until several listens in. "Forwarding Home" offers a change from the instrumental norm by introducing guest vocalist Rob Symeonn who does his part to contribute to a very chill track.

Whether its the more traditional slower tempo "Curva Peligrosa" or "Asheville" or the uptempo, danceable club tunes "Destiny" and "Persistance", the new DIAW album is sure to please dub fans young and old. Though this album is probably not one for you pop music fans out there, I would recommend it to anyone who enjoys any sub genre of reggae/dub.

From the Black Ark days of Lee Perry to Tubby's Waterhouse dubs and discipleship of King Jammy, it's good to see that DIAW are carrying on the torch for dub fans worldwide. "Vaporized" not only exemplifies the evolution of dub but pays tribute to its history by retaining key characteristics that make quality dub music what it is. Visit their website and grab up some of their free live downloads for further listening!

Dub Is A Weapon Links