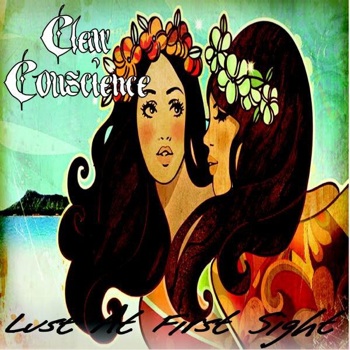 Clear Conscience’s 7th full length album entitled Lust at First Sight was released in late May just in time for summer. Being a huge fan of Clear Conscience I was eager for the release but was disappointed when the release date was pushed back for another two weeks. However, once I got my hands on the CD and listened, that disappointment quickly faded away.

This album is the PERFECT summer time CD as all the songs are acoustic and send out an irie island vibe. The first song to catch my attention was “Back for More” which features Eddie Blunt of High Tide another one of my favorites. As soon as the song begins you can sense a High Tide vibe with a Clear Conscience pulse, making it one of the best songs on the album. Jeff pulls his verse from the song Away which was featured on Clear Conscience’s second latest release, Herbal Remedy. This verse nearly sums up the feel of this entire album, let’s get together away from all the busyness of everyday life and just enjoy the day with the people that are the most closest to you. The next track,” Island Feeling”, is a classic that was first featured on What’s Inside Counts and although it differs from the original being that it is all acoustic I feel that it actually sends out more of an island mood than the original. Listening to this version definitely makes you want to either stick your toes in the sand or swing in a hammock and enjoy an island breeze. “Connection”, is a new track that features Dub Passenjah who is also featured on such songs as, “Inna Mi Garden”,” Life Serious” and “No Gunshot”. Dub Passenjah’s unique voice and lyrics added with Clear Conscience’s rhythm and music make this song the perfect song to enjoy with some friends. My only complaint is the length of the song which is under two minutes compared to the normal three to four minutes of Clear Conscience songs featuring Dub Passenjah. Track 6 is another timeless Clear Conscience song, “New Love”, and features Josh Heinrichs formerly of Jah Roots. Although the original version which features Matt Velasquez is my favorite version of this song, this version is unique in that it is acoustic and it features a different guitar intro and a different guitar strum then the acoustic version that is featured on Josh Heinrichs’ Josh Heinrichs and Friends. I was ecstatic to see that “Lost My Love”, which is actually a 77 Jefferson song and features Clear Conscience, was on this album. Ever since I heard this song on YouTube in late 2010, I’ve been hoping for it to be released on an album. Joel Castillo’s guitar rhythms, talented voice and deep lyrics will have you thinking about the love that you yourself once lost and will have you listening to this song over and over again. The last two songs,” Sensi Time” and “Remedy”, are the perfect finish to this album. Even though both of these songs are remixed songs of previous versions, they are better than the original in my opinion. I know a lot of you who have heard “Remedy” are thinking how can there be a better version than the original which features Michael of Orange Grove? Just trust me, once you hear this version you’ll be hooked too. First, this version features Josh Heinrichs as well as Skillinjah who lays down the first verse. Second, the guitar rhythm is more of an upbeat Hawaiian style rhythm which is sure to be the remedy for anything that ales you.

My only complaints about this album are the duration of the album and the amount of new songs featured on it. The album is only 10 songs, which is short compared to the fact that the last two Clear Conscience albums released average at 22 songs in length. Out of the 10 songs featured on the album only 4 of the songs are new releases. However, don’t let that discourage you from buying this album because even though a majority of the songs are not new they are some of the best remixes I’ve heard. As stated early the versions of “Sensi Time” and “Remedy” that are featured on the album are my favorite versions of the classic hits by Clear Conscience. Overall I encourage you all to pick up the album on ITunes or wherever and grab some beers, buds and swim wear and jam out to this album all summer long.