C-Money & The Players Inc / Ease Up 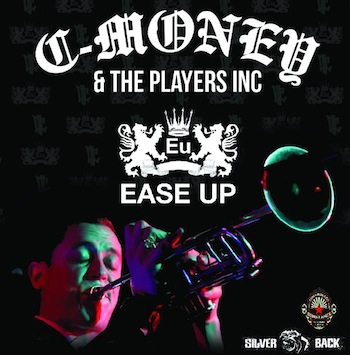 I got to meet these SoCal reggae rockers right before they went on stage, so I was stoked to see their positive and energentic attitudes reflected in their set.  It was a non-stop romp through some quintisential SoCal and reggae sounds.  The group kicked things off with their version of Sublime’s classic Garden Grove, then dove right into some original material, and before the crowd could register what hit them they launched into a punky reggae version of Legalize It.  The band certainly displayed their reggae chops most on their version of Steel Pulses’ Roller Skates.  The rhythm section really kept things tight while hitting the harmonies dead on with lead singer Rico Estrada.

The group then showed off their song writing ability with some of their originals.  The song Number 1 brings that hard Cali vibe, with a non-stop bassline from bassist Nate, then tops off with a killer guitar solo from lead axe man Will Boyce.  Fresh off their new EP, the band then busted out their song Another Time, a smooth, steady reggae riddim ready for the radio.

One thing is for sure, Ease Up gets the crowd in a good mood to party.  People were definitely getting down to the music. Whether it was some fast paced punk rock or some straight roots, the band had something for everyone at the show, don’t miss out next time they’re in town.

Right off the bat these guys come with a sound that is at the same time as smooth as their jazz inspired, dubbed out basslines and as sharp as their suits. Christofer “C-Money” Welter grabs your attention by effortlessly jumping back and forth between trumpet, keys, and vocal duties which include both singing, rapping and some spoken word.  This combines with some rootsy basslines, bluesly guitar and rock steady drums for an audio experience that requires a smokey lounge setting.  Good thing the Boom Boom Room happens to be just that.  The low lighting and classy décor reminiscent of the speak easy days make it an ideal venue for music with a vibe I can only describe as “too cool.”  Even the bouncer was wearing a suit that night.

The packed crowd at the Boom Boom Room was of course feeling the vibe as well.  Few, if any, were sitting and the dance floor was alive and moving.  While C-Money is clearly the creative force in the project, The Players Inc held it down, creating smooth rhythms for C-Money to do his thing on vocals or trumpet but also adding their own flare.  Carlo’s solid basslines kept things grooving while Pelle busted out some Steve Vai-esque lead guitar lines to compliment.  The drummer, apparently flying in from Brazil that day for the last leg of the tour, was the liveliest one of all on stage.  A smile was always on his face as he effortlessly twirled his sticks while executing rock-solid beats.

All in all, I would go out and see these guys any day of the week.  They completely captured me with not only their style and songwriting ability, but with their smoothness and cool-as-a-cat attitude while on stage.   I got to catch up with some of the players on their set break.  They have some great stories of the road and working with some amazing musicians, including Slightly Stoopid and John Brown’s Body.  But really what stuck out most to me was Chris’s advice he would give for up and coming artists.  His answer was simple, and seemed to sum up his view on life in general, and I can’t help but subscribe to it myself:

“Work hard, smoke weed, and enjoy your life.  Everything else will work itself out.”