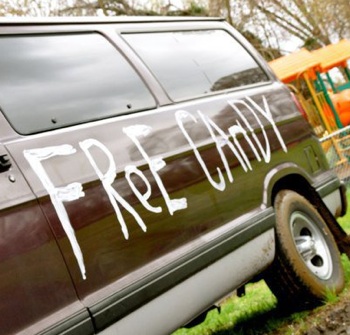 Bumpin’ Uglies have just recently released their new album titled ‘Free Candy’.  Having never listened to the band before, I was unsure of what to expect but I have to say I was pleasantly surprised.  Called “The Uglies by many fans, they began playing live shows around the country in 2009.  Their popularity has spread primarily throughout the east cost, but they look to tour new cities across the nation in the near future.  "Free Candy" is Bumpin’ Uglies Debut LP and, I believe, one that brilliantly showcases their talent.  For those like me who were blind to the talent of Bumpin’ Uglies, give ‘Free Candy’ a listen and you won’t be disappointed.

The album begins with “Addictive Personality,” which is actually one of my favorite songs on ‘Free Candy.’  The title is pretty self explanatory as to the content of the lyrics, but the sound was, to me, a bit reminiscent of Can’t Hang.  I found it to be a good mix of reggae and ska that kept me interested til the end.  “Hallucinations,” which I also liked in particular, was a bit faster paced than the previous two songs.  The guitar was heavier too, an enjoyable alternation from before.  Moving down the track list, I came to “Instead.”  They switched back to the acoustic guitar here but kept the horns as well, keeping the listener on their feet as to what’s coming next.  “If I can’t have love, I’ll love what I have instead,” is the chorus, and probably my favorite element of the song because it is actually an important message.  What is so great about this album is that they were able to avoid the mundane sound, with each song sounding exactly the same.  Recently I have found that quite often to be the case, but Bumpin’ Uglies were able to flawlessly incorporate variety.

The new release ‘Free Candy’ is one truly worthy of some positive attention.  They provide a smooth blend of countless genres rolled into one, and keep their listeners on their toes with no two songs sounding the same.  Being a first time listener of Bumpin’ Uglies, ‘Free Candy’ has done enough to make me a lifetime follower.  This is definitely an album worth taking a look at.