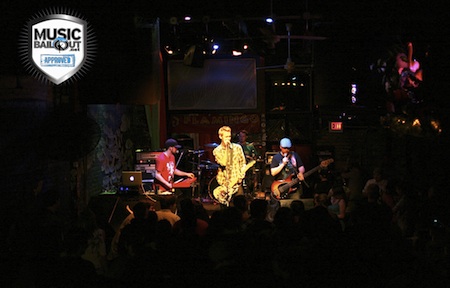 “What the hell is wrong with you?”  That’s what I say to anyone who hasn’t seen a Ballyhoo! show.  That wasn’t a joke, I honestly mean that.  The band has so much flavor in their music: Reggae-check, Rock-check, Punk-check, kick ass-check.  Austin Texas and the fans at Flamingo Cantina got all that flavor and more. Don’t believe me?  Ok let me explain.

I got to the show in a cluttered, as usual, downtown Sixth Street. I park, get out of my car, as I’m heading to the venue, I see a car wreck along the way as well as a few street performers. I finally make it in, and was happy to know that Ballyhoo! was about to take the stage.  Big D was sound checking the drums and I could see Howi about set to run out onto the stage.  So far, this Austin crowd was the biggest I have seen come out for these bad ass Baltimore boys. Well deserved I must say.  These guys have put their time in building a fan base by touring endlessly and have made it a point to stop in Austin each time.  Howi kicks off the night with the first track off their new album Daydreams “Evil Penguin”, and if you can imagine a boot heading straight to your face, that’s what the opening to a Ballyhoo! show is like. The crowd’s response from the first song alone meant this was going to be one hell of a party.  Having played two more songs off the new album, “Last Night”, and “Diamonds”, many of the Ballyhoo! alumni were antsy for some old tunes. “Friend Zone” was one I was hoping they were going to play; and even though I have a torn rotator cuff I got so caught up in the moment I was throwing my first up in the sky during the chorus. The good vibes coming out of the speakers were enough to numb my pain for the time being.  The crowd then settled down shortly later when they broke into a few of their more chill songs “The Quest” & “Somewhere Tropical”, which made me just close my eyes for a short minute and imagine being on a beach with a cold Margarita. The band went on to play many more classics like “Close To Me”, “I Lately Notice”, and crowd favorite, “Cali Girl”.  Before closing the night out the band played two more songs off their new album like “Say I’m Wrong”, and “The Getaway”. Meanwhile, a fellow Ballyhoo! fan yelled out to hear “Paper Dolls”, in which Howi and the rest of the gang gladly obliged.

When I spoke to Howi after the show, he mentioned how his voice was taking a beating the past few nights. And honestly, who would know? Quiet frankly, he sang his ass off and I thought it was one of the bands best performances I have ever seen (and I have seen them at least 5 times, if not more). So what did we learn? First, and foremost, if you have yet to see a Ballyhoo! Show, it is about time you did. Second, prepare to wear either a football helmet or hockey mask, ‘because their performance will slap you in the face (in a good way!).  Lastly, go out and support the bands you love before they start to blow up.  Seeing them in an intimate setting is the ONLY way to see them, and these shows will be few and far between before we know it. Ballyhoo! are about to make The Warped Tour their home this summer, and I am sure small clubs will be a thing of the past for this new Law Records band.