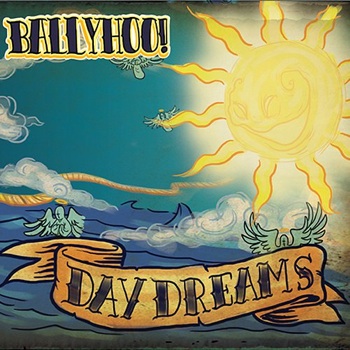 It’s about that time of year where vacations are coming to an end, bands are wrapping up their tours and students are returning to school which can only mean that summer is coming to an end.  As those care free days slowly transform into hectic weekdays you begin to wish that you could have a few more weeks of summer. Just because you had to trade in your board shorts for real shorts and you actually have to wear shoes now doesn’t mean you have to lose that summer feeling. On September 6, 2011 the in your face rock/reggae/party band Ballyhoo! will release their 4th full length album entitled Daydreams which is jam packed with meaningful lyrics and music to keep that summer time vibe going. This will be the first release as the newest members to the Law Record’s family and has had some high expectations to meet as it is a major move for both parties’ careers.

The album opens up with “Evil Penguin” which features a classical like piano introduction that is picked up by a well balanced mixture of power chords and upbeat strums to produce that punk rock/reggae sound that the band is known for and continues onto the next song “Last Night”. I feel as if the next three songs: “Diamonds”, “Say I’m Wrong” and “Walk Away” are associated and were specifically put in that order to tell a story about relationships. The song “Diamonds” is about finding that one person who you can’t stand to be away from and is everything you’ve ever wanted. The beginning talks about how some envision the person of their dreams to be absolutely perfect in every way. In reality we have to take the good with the bad and that the perfect person is just an ordinary as you or me or as lead singer Howi puts it, “a diamond in disguise”.The single “Say I’m Wrong” is about having feelings for somebody who doesn’t feel the same way and is summed up by the chorus, “If standing up for this is wrong then I don’t want to be right.” Finally “Walk Away” is about realizing when the love is gone from a hopeless relationship and it’s time to let go of everything and go separate ways. Things speed up with “Sandcastles” but then slow back down with the acoustic/electric track “If You Gotta Go”. “Meat Head” caught my attention within the opening seconds and quickly became my favorite track due to its energy and its splendid bass line. “Bootleggers” is a track that contains powerful lyrics about overcoming all the negativity faced in the entertainment business and using it to get to the top. The easy going tempo continues on to the next track “Antisocial” but is then picked up quickly by “The Get Away” which includes a first-class drum fill that you didn’t see coming and a well placed breakdown that reminds fans of how hard Ballyhoo! can throw down. The album is wrapped up with the final track “Ricochet” and features a similar piano style that was seen in the opening track. This track is an ideal conclusion to a wonderful album as it slows things down to leave listeners with a positive message that delivers a sense of security to those who are down on their luck. The message of ”Ricochet” is that things don’t always go as planned and sometimes life gets hard but as long as you have your health and you stay focused you’ll be ok and eventually you’ll bounce back to the top.

One thing that is easily noticeable about this album is how much Ballyhoo! has matured musically compared to previous releases. Howi displays an excellent use of guitar techniques throughout the album as almost every song features a guitar solo, progression or breakdown. Mista J has always provided the band with killer bass lines but I feel like he out did himself this time with some of his lines. Scott focuses more on the keys as his primary instrument on this album rather than his DJ equipment and although he does a great job on the keys I feel like there should have been more involvement with DJ effects.

The band is known for being a party band and previous albums have featured typical party songs  that contain lyrics involving sex, drugs or rock n’ roll. There is nothing wrong with having songs about partying but generally they contain no emotion. Daydreams features 12 songs that all have powerful lyrics and is the first Ballyhoo! album to not have a song about partying and shows how much the band has matured not only musically but lyrically as well. These meaningful lyrics not only allow fans to listen to the music but to also feel the music.

A lot of bands can write great songs but it takes a lot more to put out a great album. The proper ordering of tracks is a vital key to producing a high quality album which a lot of bands don’t realize. A distinguished album is one that you can listen to entirely without having to skip around. The key is to keep listeners interested by controlling the tempo of the album song by song and this is exactly what Ballyhoo! does. The album kicks off with two fast paced tracks to get the energy flowing for listeners while things slow down for the third song and slowly build back up to a few more high energy songs making the album like a roller coaster ride for your ears.

I base this on if the band has its own unique style or if they’re just another mediocre band that sounds similar to all the other mediocre bands out there. As I mentioned early Ballyhoo! has matured a ton since their first two releases and the addition of this musical maturity is helping to give the band their own unique identity. Songs like “Evil Penguin” and “The Getaway” are one of kind songs and are perfect examples to show how Ballyhoo! stands out from the norm.