"One Drop" Review By Tyler Serenelli 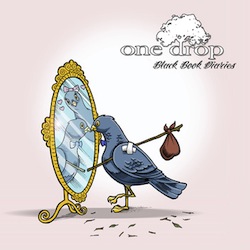 During the Spring of 2008 One Drop left us with Mission Blvd, an album that was unique and incredible in pretty much every way necessary. Now during the Summer of 2012 One Drop will be releasing Black Book Diaries on June 26th. This album, just like their previous one, is fully unique and incredible. Each song is put together perfectly. From each individual instrument to the vocals and lyrics, Black Book Diaries leaves you wanting more and more. We begin with Devil On The Pulpit. A powerful song conveying the message that the Catholic Church is corrupt in a few ways. In it we hear powerful bass lines, skankin' guitar riffs, perfected harmonies and an excellent mix of horns and saxophones, ending with a groovy sax solo.

Next we have Hector Pieterson. This song was written about Hector Pieterson, who was killed at the age of 13 in Soweto, South Africa after police opened fire on protesting students. June 16 was later declared National Youth Day. Again the song has killer bass lines, memorable guitar riffs and it tells a story that you don't really a lot about.

One More Chance is, in a way, a love song. But instead of the traditional love song where the singer is talking about his lover or pleading them for forgiveness, he's telling her that she's got one more chance, or she's gone. This one is a slower tempo than the others before it, and like Devil On The Pulpit, it has an awesome sax solo near the middle of the song. The next song is titled Tricked Into The War. This track is nothing more than a knock at the Bush Administration and the band's opposition to the war in the Middle East. With its politically strong lyrics, the band sends a strong message by saying, "the youth has been tricked into war", and that 9/11 was just a decoy to get us into the war. Its one of those songs that you only come across once on an album, and sometimes only once is enough to send a very powerful message.

As we move along More Than A Landscaper is dedicated to the blue collar workers and calling for equality for the Latinos and Spanish people everywhere. It consists of traditional Mexican style of horns in the background, more skankin' guitars, and again powerful lyrics that send a message. This album has so many incredible songs on it, but the one that stood out to me and instantly became my favorite was I'm Sorry (But It's Over). it starts with an unmatched melody on piano followed by vocals and purely classic harmonies. Again this song is a slower beat, but that doesn't mean you can't groove to it! And the harmonies during the chorus' are unlike any others on the album. The singer tells a story of a relationship that came to end, not in a bad way, but in a way where that was needed. Over and over he says, "don't wanna cause you no pain." Making it better for everyone involved. Theres a reason why this song became my favorite immediately, everything about it is just awesome!

As we move along the songs that follow are all really good and unique in their own ways, and sometimes, like other before it, tell a story or send a powerful message. The two final songs are really unique because they did another version of More Than A Landscaper, but this time the lyrics were in spanish. I thought that was really cool, kind of like a shout out to the people whom the song is about. And finally theres a really deep dub mix of the song Forward. Telling us that as a race we have to keep moving forward and not let the human race destroy itself, he says repeatedly, "self destruction."

So all in all this album is a really incredible follow up to Mission Blvd. Each song is unique and or tells a story or sends a message. I like the way the band used a lot of politically strong lyrics and stayed close to the traditional reggae roots. Black Book Diaries is definitely an album that everyone will want to listen to over and over again. Its easy to sing a follow along to and it just makes you want to groove to it. Go pick up Black Book Diaries when it releases on June 26th!