"Shake Up The Place" Review by Jason Gallagher 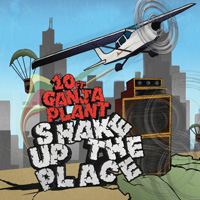 "Shake Up The Place"

10 Ft. Ganja Plant has just recently released their sixth album, titled ‘Shake Up The Place.’  Forming in 1999, the roots reggae band released their first record ‘Presents’ in 2000, independently on I-Town records.  Afterwards, they continued to build their arsenal of music, compiling it all on to two cassette tapes.  As a result, they were introduced to a well know record label, ROIR, who would go on to produce their records to come.  It was through ROIR that they were introduced many new sounds and musicians for their upcoming releases.  After the ‘Bass Chalice’ album in 2005, 10 ft. took a small break, giving them time to gather new vibes, build a new studio, and lay a foundation for their 2009 record “Bush Rock.’

Since, they have been as good as ever, which is true for their new album as well.  ‘Shake Up The Place’ was a refreshing reggae album with a laid back vibe everyone can enjoy.

Opening with “My Roots (feat. Stylford Walker),” it was pretty evident what direction they were taking the album.  Like ‘Midnight Landing,’ ‘Shake Up The Place’ reiterates the bands passion for the reggae roots.  Embodying all the elements one would come to expect from roots reggae, like heart-vibrating bass lines and blasting horn solos.  I thought it was great that all the songs throughout the record, in some way, held true to the roots aspect of reggae in one way or another.  While listening, I often found the music comparable to that of reggae greats John Browns Body.  Both groups have a similar laid back vibe, typical to this genre of music, but I also think they convey a similar message as well.  Although I am no expert, love and family seems to be a reoccurring theme in roots reggae music and, I think, makes itself know in the music of 10 Ft. Ganja Plant as well as John Browns Body.  Those who are fans of Bob Marley and JBB will definitely enjoy ‘Shake Up The Place.’  The track “Pharoah’s Army,” one of the best one the album in my opinion, talks about the freedom of an oppressed people, which is something everyone can appreciate.  It is not just the lyrical content, but also the overall vibe of the song that drew me to it.  I found this to be the case with several tracks on the record, which really separates it from most other reggae albums in my mind.  I think this album really stayed true to the roots of reggae and will meet all the expectations of 10 Ft. Ganja Plant fans.

‘Shake Up The Place,’ the new release from 10 Ft. Ganja Plant, definitely met my lofty expectations, and stayed true the reggae roots.  With a sound I found to be similar to that of John Brown’s Body, it had the relaxing vibe we have all come to expect from 10 Ft.Ganja Plant.  It is an album that you can easily listen to all the way through, and to those who have not already done so, give them a try.