Get To Know "Typical Hawaiians" 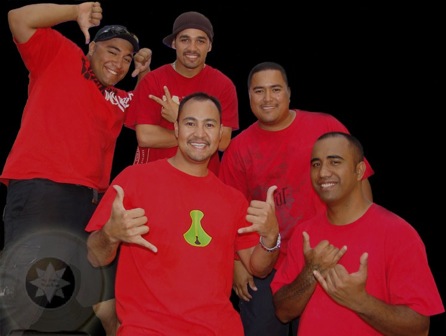 The long overdue return of this Na Hoku Hanohano Award winning Reggae Band. With the release of their respected junior album, their electrifying music and style offers contemporary Hawaiian music and island reggae with a fresh new sound! Their previous albums "In a Positive Vibrations" and "Keep It Together" have gone to the top of the island charts and received Hawaii's highest award for "Reggae Album of the Year." Their latest release World Goes Round is destined to continue the lineage of great music produced by the group over the years. Typical Hawaiians - comprised of members Bruce Zulueta, Tazra Vegas, and Thomson Enos - has been in Hawai'i's music scene since 1996. This young and charismatic group was only the second band to achieve Hawai'i's highest award for music created within the reggae genre. They are respected both as lyricists and instrumentalists, evident in the music on their recordings. Because of this, they were called upon to perform as the back-up band for internationally known reggae star Rupert "Ojiji" Harvey (former lead singer of Messenjah). The three members of Typical Hawaiians bring multi-faceted musicianship to the group.

Growing up with a musical background, Bruce Zulueta realized that his forte was in song and dance. He seized the opportunity to perform and develop his unique style. Known for his electrifying stage presence, Bruce dazzles audiences with his powerful renditions of songs that are close to his heart. Being one of Hawai'i's most prolific song writers, Bruce inspires people of all ages with his soul and spirit conscious lyrics.

Tazra Vegas picked up the 'ukulele by age 7. Overcome by his desire to live the life of music, he has sought to master a large variety of musical instruments. "Taz" is respected for his ability to perform equally on the bass, guitar, keys and drums, so much so, that Hawai'i recording studios often call upon him for help, advice, and studio work.

Thomson Enos had a desire at the early age of 13 to pursue a career in music. Although his start was on the 'ukulele, he is best known for his fascinating "fretwork" on the electric guitar. His ability to enhance and embellish music through the guitar has taken him to locations around the world, including Japan, Taiwan, Tahiti and the mainland. Typical Hawaiians' debut CD, "In A Positive Vibrations," was released in 1997 and featured the hit song "Crazy" that went to the top of the island music charts. This recording went on to receive the 2000 Nä Hökü  Hanohano award for Reggae Album of the Year. In 2002, they released their long-awaited recording "Keep It Together" that once again features their talents as performers and composers and includes island music star O-shen on one of the tracks. Typical Hawaiians - their look is fresh, their sound is explosive. In short, Typical Hawaiians is a band whose appeal is worldwide.