Get To Know "The VeraGroove" 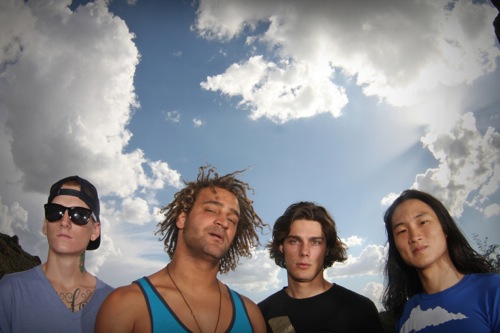 Music is often classified and categorized into genre.  We each cut up and decide which types of melodies and rhythms determine the sound of, for instance, rock, country, classical, or jazz.  However, as we ascend and rise above a heavily commercial musical threshold of recent history, more and more bands are moving away from formula driven blueprints and are experimenting and venturing into new artistic territories.  The Veragroove is a culmination of this kind of experiment.  Derived from "Truth in Music", the Veragroove collective faces the musical challenge that what may be music to some may not be music to others.

Culturally, each band member comes from different backgrounds with various musical influences, experiences, and essentially, truths.  Corey Sims (bass)  was raised on motown and funk.  Johnny Maurer's (drums) style was built upon the foundations of John Bonham, Bud Gaugh, Travis Barker, and Dave Grohl.  Sean Lee (keyboardist) comes from a classical background with Hawaiian and reggae influences.  (Lead singer and guitarist) Ricky Moore's eccentric style can be derived anywhere from Django Reinhardt to Dizzy Gilespie to the Germs.  The prism that is the result of such a variety of influences comes together in the Veragroove unique sound.

Currently the group is working on the release of their first EP, "Songs of a Travelin Man" it is do to be out early winter 2010.  The band is planning on working with the esteemed engineer Ralph Patlan at Highland Studios  in Phoenix, as well as Grammy nominated Craig Schumacher in Tucson. Meanwhile the Veragroove has been building buzz and playing consistent shows at the local Marquee Theatre and Clubhouse venues in Tempe, Arizona. Upon the release of the upcoming album, the Veragroove is planning a West Coast tour within the upcoming year.