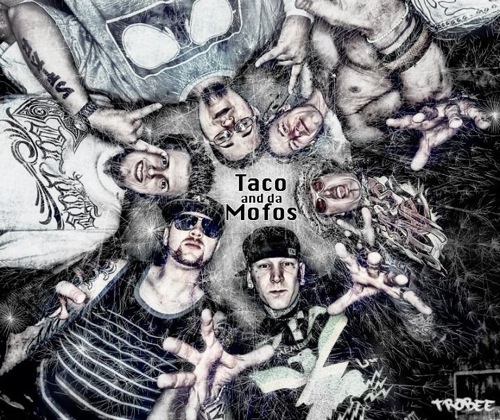 What if you could mix the feel good vibes and positive outlook of Reggae with the awe-inspiring power and shomanship of American Rock? Then throw in a healthy dash of Southern Rap with some Latin Percussion to spice it up. Add a touch of Punk Rock and a taste of Ska, and WAH-LA! You have the perfect ingredients for one of the “DOPEST” party bands of this generation...you have Taco & Da Mofos

Years ago, Taco humbly started off, with just an acoustic guitar, making crowds laugh and have a good time. Now a full out urban assault on the music biz has begun, and everyone will soon know the full extent. Taco & Da Mofos have played shows all across the country since 2000. In the process, they’ve released 4 band albums (2000's Blowin' Up, 2003's Pimpin' Advisory

Explicit Bump, 2006's Late Nite Bump Stars, and 2007's Bud, Sweat, & Beers) along with an Acoustic album and a Rap Album. Now the band is more experienced and understands what it takes to be successful in this business.

Armed with a musical arsenal that’s tailor-made to put a smile on your face, Taco and his band of bucksters have the perfect jam to set any mood. Whether it’s island grooves to get you feeling ever so right, or straight up BUMP to get your head bangin’, Taco & Da Mofos guarantee that you will party your clothes off! It doesnt matter if you’re at the beach or at the club, all you need is Taco & Da Mofos, and all problems and inhabitions seem to disappear...

Taco & Da Mofos mission is simple...to provide good times, great tunes, and even better memories to all that jump aboard. TADM have always provided the party atmosphere... they've rocked shows with such acts as the Oscar Winning Three 6 Mafia, (HED) P.E., The Wailers, Project Pat, Rehab, Lil Wyte, and MANY MORE!...The future of the band is limitless. Currently Da Mofos are playing shows across the country continuously building an un-FADE-able grassroots following one fan at a time....