Get To Know "Stiffed Necked Fools" 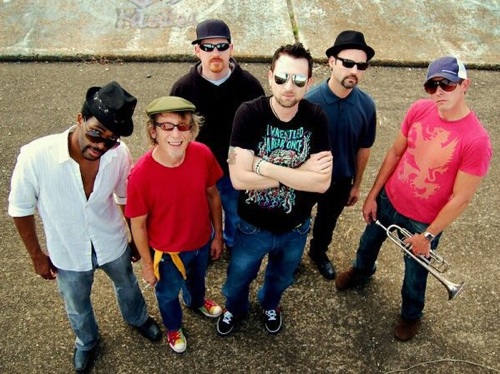 Haven’t heard of the Stiff Necked Fools?? You will!! Stiff Necked Fools is a Reggae band based out of the Shreveport/Bossier City area of Louisiana. Dan Sanchez was an award-winning Blues artist from Los Angeles who was looking to do something new, something different. His search led him to Reggae music, which soon became his passion and led him to form a project. Mr. Sanchez recruited the sounds of John Hoffman (the son of Stanton Hoffman of the Killer Bees) on drums, the fast fingers of Jason Ball on keys, and the explosive basslines of Greg Pitts. What started out as a fun side project quickly turned into something much more serious and a weekly gig. As the group began to pick up steam, the horn players arrived.

Ryan Viser (Trumpet) and Stefan Poole (Saxophones) were brought in to help give the band that big, full sound. From here things started taking off. Unfortunately, just as the group was starting to blossom, Dan fell ill to cancer and passed away in March of 2010. Devastated, but determined, the Fools worked to pick up the pieces and keep on moving. Their persistence paid off. With more players added to the group and a new sound emerging, the weekly Reggae Thursdays jam at the Tiki started exploding. With the newfound energy came creativity and original songs started pouring out week after week. Today, they are easily the hottest Reggae/Jam band in this part of the country. With the group opening up for bands such as Rebirth Brass Band, Cowboy Mouth, Bonerama, and many others, it is surely only a matter of time before they gain a national following of their own. Stiff Necked Fools are making their mark on the music scene in Louisiana and are building a rising following among music lovers who enjoy groups such as Slightly Stoopid, Rebelution, The Expendables, etc. “Our genre of music has been dubbed Bayou Reggae” says Ryan Viser (trumpet) “We definitely have that sound that Reggae is known for, but we’ve put a unique Louisiana-style twist on it that makes it really different”. This is what sets Stiff Necked Fools apart from other bands. The horn players are up front and in your face bringing heat all night. Then they’ll grab the mic and bust out a rap or sing. Even the drummer comes down and takes the reigns for a portion of the show. “You just never know what we’re gonna do. The amount of talent each member brings makes this band very versatile” says John Hoffman (Drums). Stiff Necked Fools debut album, Too Much Rain, was released May 26th and has been a huge success! This is definitely a group to keep your eyes and ears on. Stiff Necked Fools….coming soon to a club near you!!