Get To Know "Sticky Fingers" 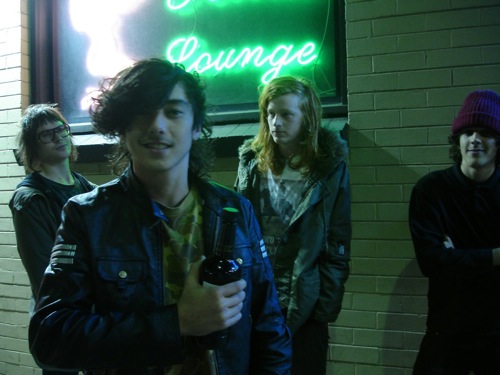 STI-FI … the story so far

The four piece Newtown misfits are mis-spending their youth while we watch. And it's as colorful as that review suggests: a melodic, mega-hectic, mash of psychedelic, pop and roots. Music to throw shapes to.

THE Sydney based four piece (sometimes 5 piece), are delivering a refreshing vibe to Australian music. The band began their rise when drummer, Beaker and bass player Paddy Fingers, met busker Dylan Frost one night in early 09 outside the Coopers Arms hotel in Newtown.
Dylan, fresh from N.Z. was on the streets with his guitar busking for coin outside the pub. “We met him,” Patty says, “when the Coopers Arms bouncer started hassling us and telling us we should give him some money.”  Frost’s melodic sense brings the Kiwi spirit and melodic lineage to the band.
Frost, the youngest member of the band (the rest of the band are 20), has 19 years of life and a hundred years of heartbreak in his voice. And the band surround it in textural and psyche-y, atmospheric melodies punched out by the Sticky Finger’s rhythm section’s blunt soundscapes.

The band's first mini album, the ironically titled Extended Play was released on Oct 30 2010 - they are back working to get songs and sound right for their next release (and doing some acoustic demos in the process), maintaining the sound that represents what they do live.

For their first release, in April 2010, they went into Megaphon studios and re-recorded Inspirational, Juicy Ones and Murderous Nerves, the best songs from their earlier demos, then added a couple of new tracks and now, they’re ready to go.  Megaphon (Sydney) was used to put down the bed tracks for the recording and then added keys, vox and other sounds were added at a mates studio later, the tracks are mixed by Nick Huggins (Whitley and Kid Sam).