Get To Know "Rian Basilio and the Roosters" 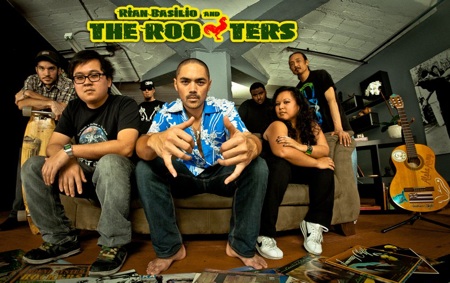 In a culture where image and material value weigh heavier on a musician’s success than actual talent or creed, a young man from a small town on the island of hawaii, has set out to resurrect the conscious music and harmonious spirit of an era not so long ago, yet long forgotten. With their self titled debut album "Rian Basilio and The Roosters" have created a sound that will transport listeners back to the golden age of reggae. They have combined the elements of roots, rockers and dub reggae with blues, soul, rock, hip-hop, r&b and hawaiian music. Rian’s unique voice only intensifies the already poetic and deeply personal lyrics, which touch upon subjects from world and political turmoil to equally important issues of the heart and soul. The narrative and messages that exist within his songs are delivered to the listener through haunting melodies and hooks that will linger in the sub-conscious long after the song has ended.

In order to record the album, Rian assembled a group of reggae music veterans to help him re-create the sound and feel of classic roots. From the wailing organs, scratchy chank guitar and bubbly keys, to the classic three part female background vocals and one drop drums; The Roosters have created an album that stays true to the tenets of classic reggae while still being relevant both musically and lyrically in today’s world. The much anticipated album is now available by clicking here.

With nothing but open road ahead of them, The Roosters are looking forward to spreading their music throughout the world. Their live show is an event not to be missed. Comprised of members who have shared the stage with countless reggae legends, The Roosters are no amateurs when it comes to live performance. From start to finish they come full force with a powerful sound and an energy that can ignite the masses.

Be a part of the revolution...

Rian Basilio and The Roosters Links