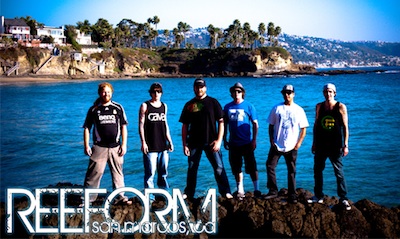 As a new band in the San Diego rock reggae scene Reeform has made tremendous leaps in a short amount of time. Since July of 2011 Reeform has played 20+ plus shows and has gained a ton of local support from friends and fans from the shows. From their first show at The Jumping Turtle in San Marcos to only a month later when they opened up for Pato Banton at the Brick By Brick in San Diego. Reeform has put in a lot of work and it shows.

The inspiration for the music is vast. Some of which include Dave Mathews Band, Sublime, StrungOut, Social Distortion, Expendables, Rebelution, Pennywise, Iration, Pato Banton, Seedless, Bob Marley, John Mayer, and many others. As a band they work very well together, always trying to improve and become better musically as well as in their own lives, and you can tell this through their music and their presence on stage.
As well as making their own signature sound they have succeeded in recording their own music and putting it on Reverbnation, Facebook and other music sources and offering free downloads so fans can enjoy the music anytime online. Having used money they saved from shows to buy recording equipment has given them a big advantage as recording time at a studio can get expensive. Mainly it shows their dedication to their music and how working hard always pays off and it certainly has for them.