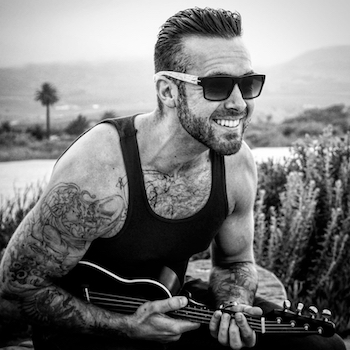 Reggae rock singer-songwriter Kyle Smith, from Ventura, California, offers his blend of Southern California style reggae with melodic acoustic rock that is catchy, truthful, and humorous. Kyle's roots come from years of his troubled youth and addiction while living in Long Beach, CA. His self-titled debut EP gives you a glimpse of the life he endured with songs like “Dope Fiend” and “Jaded” all the while keeping an uplifting spirit and tempo. Kyle is a warrior, and a beacon of light whose goal in life is to give hope and spread positive vibes with his music. His talent is raw, natural, and unforced. Whether solo with his guitar, or backed with a band, Kyle stands tall and proud. With a flash of his smile he immediately warms up the room and invites you into his world.

His debut EP is nothing short of inspiring and at his live performances, you will hear original music laced with Cali roots, dub reggae, hip hop, and punk rock. On December 15, 2017, the Kyle Smith EP was released on iTunes, Amazon, Google Play, and all other major digital outlets. His music is currently streaming on all major platforms including Spotify, You Tube, Apple Radio, iheart radio, and more.

In its first weekend of release, Kyle's debut EP broke the Top 10 for album sales/downloads on the iTunes Reggae charts. Kyle has begun regional touring, having played many local shows so far and opened for some national and international acts including, J-Boog, The Aggrolites, Pato Banton, and Tomorrows Bad Seeds, Hirie, and Long Beach Dub All-Stars. Kyle has also been featured on local internet and radio stations including, 92.9 KJEE, 91.9 KCSB, Surf Roots Radio, and Red Light District Radio. Kyle recently completed an East Coast Tour which stretched from Florida to New York this past summer of 2018.

Although his journey back to music began less than one year ago, Kyle has a solid fan base currently spanning the nation, and his single “Dope Fiend” which started this movement on Facebook, has gone viral with almost 87,000 views so far. Kyle recently won Best New Artist, at 2018's Ventura County Music Awards, and won The Best Songwriter Competition for The California Roots Festival 2018 and was invited to perform at the festival. Kyle also played many local festivals in 2018 including; Mammoth Reggae Fest, Cali Roots, and he is slated to open One Love Cali Fest on February 20th, 2019!

As for the future, Top 40 domination is inevitable. Kyle’s music is going to spark and inspire a new generation of reggae rock enthusiasts.

Kyle Smith's newest single "Astray" was released February 15th, 2019, on iTunes, Amazon, Google Play, and all other major digital outlets. Look out for his next release, "Permanent Vacation", coming soon!