Get To Know "Kolohe Kai" 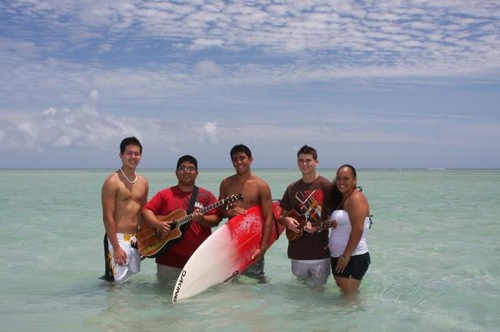 Kolohe Kai is a fresh, new island music group from the Windward side of Oahu whose reggae-influenced style is inviting and infectious.

With members still in high school, this young group caught the attention of Go Aloha Entertainment who teamed them with the successful production team of Imua Garza and Brett Ortone (Rebel Souljahz, Opihi Pickers) who soon had them in the recording studio working on a project.

The result is This Is The Life, the band’s debut CD, to be released in September 2009. This Is The Life contains 11 all original songs composed by Kolohe Kai leader Roman De Peralta, influenced by Roman’s family, faith, love of surfing, and love of life.

Kolohe Kai’s music is a breath of fresh air with themes of innocence and youthful enthusiasm, young love and all-around fun.

Kolohe Kai – Roman, Noah, Jasmine, Ryan and Jordan – love making music and it shows during the band’s upbeat live performances, fun for all ages and enjoyed by lovers of all flavors of local music.

Kolohe Kai needs your support so pick up a copy of their new CD (This Is The Life)!