Get To Know "Hollie Cook" 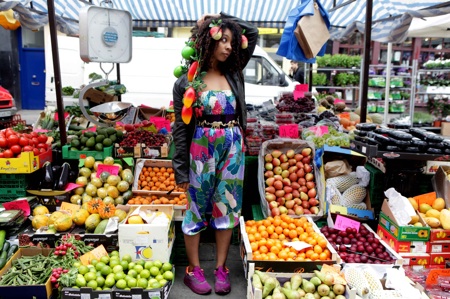 Hollie Cook was born and bred in West London in a household dominated by music. She gravitated to the sounds of Marc Bolan, David Bowie and The Cure. With Sex Pistol Paul Cook as her dad, music was always around.

Entering professional acting, singing and modeling at a young age; Hollie soon rejected her performance arts schooling for a musical path truer to her influences. Family friend and Slits singer Ari Up persuaded Hollie to sing backing vocals for a new EP ‘Revenge of the Killer Slits’, which she followed by ditching school to join the band on a six week tour. Hollie was now an official Slit – Ari referred to Hollie as the ‘Second Singer’ – so when it came to record a new Slits album in LA, Hollie’s vocals, keyboards and even her song ‘Cry’ all featured.

More collaborations followed: a duet with Jamie T on his ‘Chaka Demus’ EP,, with Ian Brown on ‘The World Is Yours’, and most significantly as featured vocalist on Mike Pellanconi/Prince Fatty’s underground reggae hit ‘Milk and Honey’. The single received airplay across BBC Radio 1, 6 Music, XFM, Kiss and even ended up on Grey’s Anatomy. Hollie jumped at the chance to get in the studio with Mike as she was smitten by the tracks she had heard. Hollie’s passion for reggae singers Janet Kay and Phyllis Dillon combined with classic 60s girl groups formed the basis for her new solo work of self coined ‘tropical pop’. The two have recently been locked in the studio recording her self-titled debut album scheduled for release on Mr Bongo Records in May 2011.