Get To Know "Ellwood" 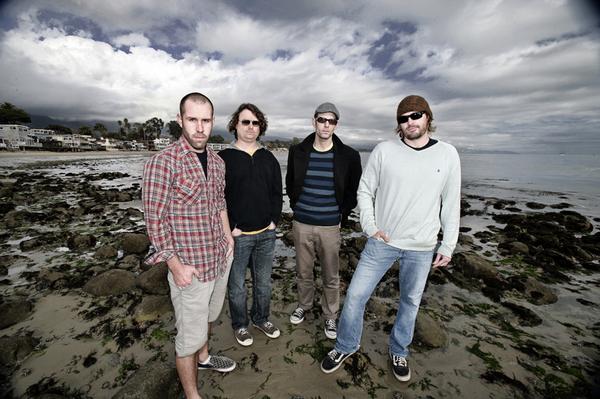 In this day and age everyone has a band, and it’s easy to get lost in the haircuts and the ‘this–core’ and the ‘post-that’ and the long band names that invoke bloody doom, so when a bunch of accomplished musicians get together and use their abilities to craft sun soaked Southern California reggae and laid back ska, it’s like, ‘finally, a band that I can just drink beer and dance to.’ That band is Ellwood and they’re the product of lazy days spent in California’s Santa Ynez Valley just jamming in the garage, the guest house, the barn and a bar. The results are Lost in Transition, Ellwood’s debut on Fat Wreck Chords, due out on May 10th, 2011.

So when Chuck, the golden voiced pilot of the Mad Caddies moved home to his tiny farming community, there was nothing to do but get together with some buddies (including the original Caddies drummer, Todd) and make music. It was either that or ranching, and you can only do one of those in your garage while drinking beer, and so Ellwood was born out of boredom and the desire to make a soundtrack to long, empty days, which, if you look at history is pretty much the inspiration for all bands that are worth a shit. Anyway, fast forward, and this time-killing project grew, eventually annexed Dustin from the Cherry Poppin’ Daddies on keyboards and began recording in various sheds, studios and the aforementioned bar (home of bassist Graham) and suddenly, Chuck found himself with a new band with a cool record, standing in LA with a copy of Lost in Transition at a new years eve party with Fat Mike. After a few closed-door negotiating sessions, all parties emerged alive and the marriage was arranged. Fat Wreck would put out the first Ellwood album.

It bears mentioning that despite the album’s name, Ellwood is anything but an awkward transition. Taking the most flavorful bits of the Caddies frenetic sound this is a band that sounds like they’ve been doing this for years, and they have, just not together. Strangely, lineup changes over in the Mad Caddies camp have led to a situation where the Ellwood boys have stepped in and now everyone in Ellwood is also a Caddy. Pretty wild stuff, but that’s what happens when you’re making music in a small town. It’s like dating the locals at your bar. There’s gonna be some overlap, folks.

Anyway, these dudes are no strangers to the road and I’ve heard right from Chuck’s very mouth that Ellwood plans on touring their asses off in support of Lost In Transition, so get your porkpie hat and your blunt and get ready to see one of the most seasoned and talented bands you’ll ever see embark on a first tour. Oh, and since you asked, the name has nothing to do with the Blues Brothers. It’s actually named after a dude from California who introduced the eucalyptus tree to the US or something. Um, Dave’s not here, man.

Hear new tunes from the bands up and coming debut release Lost In Transition by clicking here.