Get To Know "Direct Influence" 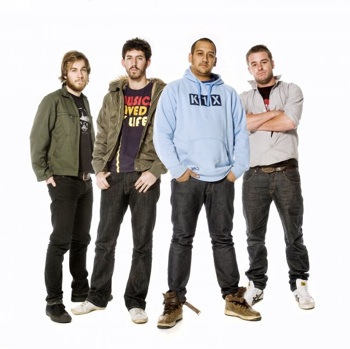 Direct Influence had a hell of a year through 2010 with their debut album release of ‘War In My Kitchen’ with Dan Sultan and English MC EQ guesting some powerful tracks amongst a full string of their finest work. Even before release, War In My Kitchen was off to a great start with lead single, Final Word receiving significant national radio play and rave reviews - “Direct Influence have nothing but talent” (Beat Magazine). DI hit the ground running with fully national tours of Australia/New Zealand through April and May bringing their huge live show to fans far and wide.

War In My Kitchen by Direct Influence War in My Kitchen’ spawed a new era for the reggae/hip-hop founded duo who have managed to unleash their many other musical urges onto this disc to produce a truly ground breaking debut. Marcus explains the development of the record - “We love electro, we love rock and of course we love our soul heavy reggae and hip hop… On this album we wrote songs regardless of what genre we thought they fit into... in fact we didn't really think about the genre at all, we just wrote whatever came to us….. It is easy to tell when you’re onto something good.”
The album’s mix of love, fun and empowerment is sure to strike a chord with anyone from chart-gazers to reggae rude boys to club stompers and indi kids alike. The second single, ‘For My People Feat. Dan Sultan’ sends a clear message of hope - over heavy beats and powerful guitar riffs - to anyone who has ever been oppressed - “How can we live in a world that’s so cold? Rise up against the people coz I’m telling you, rise up against the people, they be selling you. This is for my people. This is for a brighter day.”

Collaborating with some of Melbourne’s finest acts including Phrase, True Live, Diafrix and Blue King Brown, (to name a few) Direct Influence have been bringing their unique sound to audiences across Australia for the last 4 years, breaking through with their first official EP, Herbal Ninja in 2006, followed by the Better Day EP in 2008.

Front-men Dylan Smith and Marcus Ross have been writing and performing together since their high school days in Bunyip in rural Victoria almost a decade ago. Since then, the pair has grown into one of the fore-front acts in Melbourne. With a backlog of ground-breaking tunes to record, they embarked on their debut album drawing from a network of talented producers, collaborative artists and brilliant guests with a level of excitement and passion evident in the quality of the final product.

Putting on a great live show for their fans is their number one task and 2010 saw them repeat this over 70 times “Playing live is the ultimate test and if we pull it off it produces the greatest rewards… It is the live show that links the D.I. to our audiences…. The CD is a mere souvenir of that experience…..”. Included in this heavy schedule were Japan Music Week in Tokyo, The Hills Are Alive Festival, Woodford Folk Festival, Rhythm & Vines Festival NZ as well as a string of support slots in The Original Wailers, Chali 2Na, The Black Seeds and Kora whilst they headlined the remainder.

2011 will be bringing lots of good things including a potential second release so stay tuned!