Get To Know "The Codi Jordan Band" 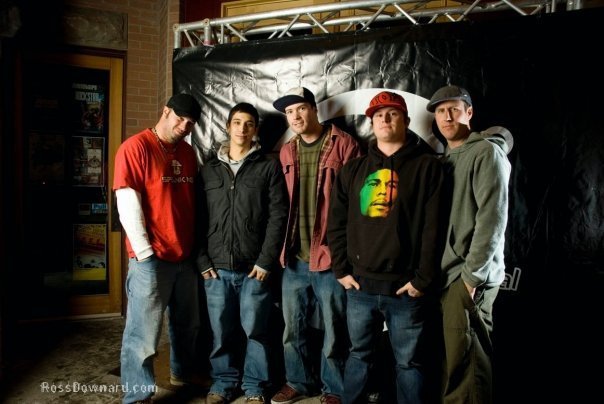 The CJB is an energetic, addicting, and always fun Reggae Rock outfit from the greater Salt Lake City area of Utah. Their success so far has been attributed to their hard work and dedication to providing quality music to a young exciting crowd! The following depicts some of the Grass Roots Accomplishments made by the band.
A solo album by Front Man Codi Jordan entitled “Vacation” was completed in Nov. 2008, and received rave reviews from fans and industry professionals alike. From the album came The CJB, which has now become a performing force in the Intermountain west and beyond. The band includes CODI JORDAN on guitar and vocals, MIKE LEE on lead guitar, JONY KNODER on drums, CAMERON GOLDSBERRY on bass and DK on keys. Utah radio stations, including 97.5 The Blaze, and X96 Alternative have rotated Codi on there local music programs. The single "Travelin Man" is on full rotation on KBER 101.1, the #1 rock station in the market.
The CJB has played special events for several radio stations, and was the opening band for The Dirty Heads and Pepper at last years Root Rock Reggae Festival in Park City. The band also opened for the Expendables at The RUM JUNGLE Mandalay Bay in Las Vegas. Most recently, CJB headlined one of the Spring Break concerts at The Canyons, Utah’s largest ski resort. Local college radio station 88.1 WeberFM of Ogden UT, awarded the album “Vacation” with LOCAL ALBUM OF THE YEAR for 2008. The band opened for Dashboard Confessional in front of a crowd of over 5000 people at THE WINTER DEW TOUR in Ogden UT in Jan 2010, and then went on to open for The Dirty Heads in Park City for the Sundance Film Festival. Currently, the CJB has three Tracks witch are played daily in in every Eddie Bauer store in the U.S. and Canada.
The CJB delivers an energetic and exciting live performance of their original material, along with a few surprising covers. The band has seen crowds grow exponentially across the Inter-Mountain west in recent months as it looks to expand the madness nationally. Independently Codi and crew have been able to land CDs in all of Utah’s major indie record stores, all Best Buys from Boise to Las Vegas, and are seeing consistent sales on Itunes, and Amazon. The band has also made sponsorships arrangements with from Powder Mountain Utah, Honest Tea, Vitamin Water, The Aztec Highway, Underground herbal liquor and Skullcandy. With more than 40,000 friends on Myspace, and over 250,000 plays, the music fan base is defiantly growing . CD sales and downloads are exceeding everyone's expectations, and the songs go right into the public's heart as the music spreads.
The CJB has been playing venues in Utah, Nevada, Colorado, California, Arizona and Idaho, and will be coming soon to an area near you!
THE CJB IS IN THE STUDIO NOW RECORDING THEIR FOLLOW UP ALBUM "POSITIVITY" DUE OUT VERY SOON.... CHECK THE BANDS SITES FOR DETAILS AND SNEAK PREVIEWS!!!!!!!