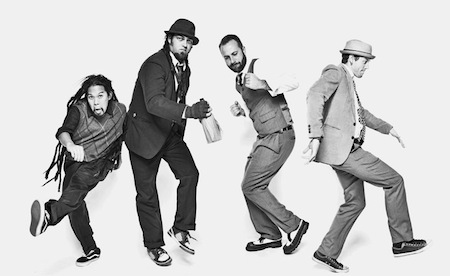 My favorite shows are when the venue compliments the artists and vice versa. The Red Devil Lounge is tucked into the outskirts of the hoppin’ North Beach area of San Francisco and while they bill themselves as an intimate venue it was actually larger than I had expected. In addition to adequate dance floor space, the venue offers dimly lit comfy alcove seating running along the side and also up on a second floor balcony that over looks the stage. This gives concert goers the chance to either get down and dance or sit back and relax with a tall beverage, which consequently if you’re going to see the Whiskey Avengers, is pretty much a requirement to have in hand at all times.

I met with lead vocalist and guitarist Stefan Meissner before the show and got some instant good vibes upon being offered an ice cold beer and was introduced to bassist Clint Westwood who also shares lead vocal duties. The pair seemed pretty laid back, however I shortly learned that their stage show is anything but. The Whiskey Avengers came out swinging with their mashup of ska, rock-steady and reggae. Stefan and Clint switch off on belting outgrungy bar room chants and lyrics about boozing, playing music and chasing women, some of which may soon become classic sing-alongs for the heavily inebriated.

The quartet, rounded out by Lee Pardini on lead guitar and Kevin Higuchi on the drums, got the crowd moving, giving them a taste of something different with each song. Some of their newer songs off of their latest album, Dead Man Rockin’ from Roof Rock Records are a little more reggae oriented, but they still keep their rock-steady roots with tunes like the hard groovin’ and catchy “Warrior.” The band was even able to incorporate what I will call “Ghost Horns” to compliment their ensemble with what sounds like a full horn section. If you ask them about it maybe they will tell you how they did it, but I can’t divulge trade secrets!

In between songs the Whiskey Avengers kept things upbeat with some punk rock jokes and encouraged the crowd to keep the bar tender busy and well tipped. I know I could have certainly spent all night with a drink in hand getting down to the sound. The vibe in the room was irie with the dim red lighting and fog machine (which really wasn’t necessary on that particular evening in San Francisco). After their set, I kicked back in one of the alcoves and grooved on Mike Pinto’s easy blend of SoCal Reggae-rock before heading backstage to catch up with Stefan to ask him a few questions about the band and the current scene.

What’s it like being in a ska/rock-steady oriented band and trying to break into the big roots reggae scene here in Cali?

Stefan: Well, we actually never really knew much about the scene until we got our current management. We were doing our own thing, you know, that’s just the kind of music we listen to and like to play. Honestly, if people think it crosses over to the roots scene that’s great, we’re just really grateful people enjoy the music.

Is there a ska scene right now at all?

Stefan: There’s a pretty good scene in Santa Barbara and SLO right now, but for the most part it’s under cover. A lot of ska listeners like to stick to the classics, so I think that makes it challenging for a current band like us. It’ll come back though, and we’ll keep playing it!

Any advice for other musicians out there trying to make it?

Stefan: Man, just be able to adapt to any scenario, you never know what’s coming up and you have to make the best of every situation.

The Whiskey Avengers have a show at the Blank Club on July 13th in San Jose, line up your designated driver now because these rock-steady super heroes take no prisoners!