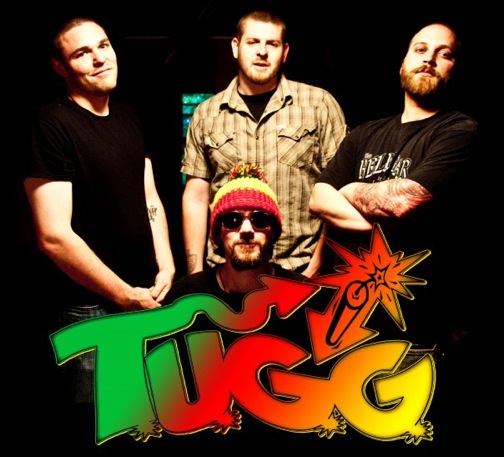 Ha, well over the years it has meant 2 things. However, we feel that we had a re-birth with this current line up about 2 years ago so we came up with a new meaning: Tone United for the Greater Good

How would you describe your sound to someone who is unfamiliar with the band?
A lot of times we just say reggae-rock to keep it simple, but I think a more accurate way to describe the sound is a fun and energetic mix of reggae, rock, and ska. We aren’t playing roots music, but we love roots reggae and first and second wave ska. "We want to make at least 1 new friend every place we go. That is what it is all about for us right now, getting out there and spreading our sound and our vibe." Everyone has different influences like acoustic music, hip-hop and good ole rock and roll. The biggest thing we try and convey in our sound is our own unique adaptation on the music that we love.

What’s it like living in La Crosse, Wisconsin? I would assume there are not many similar bands out there. Would you say that’s a good thing or bad thing and why?
La Crosse is a wonderful town. We have been doing our thing there for the past 9 years and we have a lot of friends that come to shows. It is always nice to be able to bring in touring Reggae/Ska bands and show them that there is a lot of support for the genre in our small Wisconsin town. Its not a bad thing that there aren’t many bands that sound like us because in our region we have a lot of friends that are making great waves in the scene like: Jon Wayne and the Pain, Goulash, and Key Lime Special. There are always great bands to play with and people are really responding to the music.

Congratulations on the new album “Come Sunrise”. What took so long for the new full length to finally come out?
Thanks, we worked really hard on this album. We put out Slow Chill about a year ago and we didn’t know if we were going to do a full length album but I think that once we met Brad (Ziggen) and really gelled the project started coming together. The album itself came together pretty quickly but with every project we have done we spent a lot of time in the final mixing and mastering stages to make sure the album sounded exactly the way everyone wanted it. We are proud of every song on this new album and are excited to hit the road with it!

Who were some of the guest you had on this new album?

If you listen real close you can hear Brad (Ziggen) clanging away on some tambourine, haha! We had one night in the studio where we invited our good friends Gordon and Jesse from the band Goulash and Jim Dupont from Jam’s Space down to hang out. We ended up having a really fun time and in the process we cut 3 tracks with Gordon adding some vocals to the album. 2 of those cuts stuck on the final album so you’ll hear Gordon from Goulash featured on “Bradley was a DJ” and “Lovers Rock”

What is the one track off Come Sunrise that compliments the summer season?
I think that “Cold Drinks” is the song that makes me think of summer the most. It has a very, So-Cal skate-surf sound to it and it’s all about hanging out with friends.

There are many great songs on this new album but the one in particular I love is Bradley Was A DJ. Please talk a little bit about the song and how it came together?
Bradley was one of those songs that we added later in this recording session. Joe (guitar) had the progression for the song and had recorded it on to a CD and I (Andy) was listening to it in my car driving back from rehearsal one night and just kept hearing that line “Bradley was a DJ”. I am extremely happy with how this song turned out. The idea is something I have toyed with for a long time. I got into Sublime and their music about 12-13 years ago and coupled with that and growing up listening to reggae like Bob Marley and Jimmy Cliff I developed a love affair with the music. Once I really got into Sublime and reggae I started noticing instances where he borrowed ideas, lyrics, melodies, etc… from old reggae songs, punk songs and ska songs. That has opened me up (and I think a lot of other people) to so many artists over the years, like Yellowman, Tenor Saw, Half Pint, etc…. That’s is basically the idea of the song “Bradley was a DJ” I wanted to convey my gratitude for their music bringing so much music to me and others to discover.

Brad Ziggen of the legendary Ziggens, came in to help produce the album. How much of a difference does it make when you have a talented guy like that come in and help in the recording process?
I will sum up what Brad told us about his process here…we all think he really captured the live feel of a T.U.G.G. show in this recording. He really likes to see what a band is like live so he knows what to the vibe is like, and that is why he waited until we were finished recording to come and catch a T.U.G.G. show…haha. But seriously recording with a guy as talented and knowledgeable as Brad was an amazing experience and it comes through on every track on this album. The whole process was nothing but a fun and creative time and I think everyone is really happy with the product we walked away with. Brad has been there before; he is a producer, a sound engineer, and a musician. We just tried to sponge up as much as we could while we had the opportunity to be around him. To walk into a studio nowadays and not have a computer in the room is uncommon. I think the album has a vintage feel and that comes from the wizardry of Brad knowing his equipment and how he wants to put his own stamp on a particular song or sound. "The biggest thing we try and convey in our sound is our own unique adaptation on the music that we love."

Brad  – How did you come to meet the guys from T.U.G.G.?
Jake the bass player responded to an article in the La Crosse Tribune about me returning to town to teach and play music and at the very end of the article very stealth-like I mentioned that I would like to start recording bands. Well, we chased each other on e-mails for a months and finally I went to see Andy and Jake play acoustic at a place called Del’s Bar in La Crosse, however I had to leave early before they played and I thought that was it. Meanwhile I did some asking around town in my musician circle and got nothing but 100 percent positive feedback about T.U.G.G. and that they were doing original music. That was the clincher for me, to know they were out their trying to expand as an original band and that I wanted to be a part of. Finally, Jake ended up e-mailing again and we all met up and made plans to record the album.