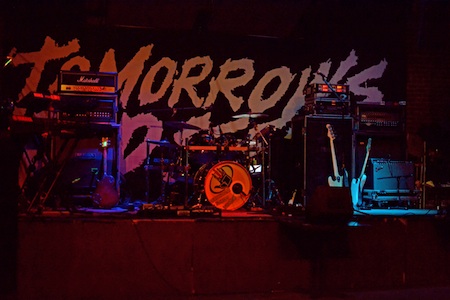 My first impression of these Hermosa Beach-based reggae rockers is that they are some true road warriors.  Lead guitarist Sean Chapman even has a leather jacket straight out of Mad Max, and their tour bus is well equipped with a workbench and full-size fridge. But as travelled as these guys are, they remain humble about their success and true to their music.  I got to sit down with Moises Juarez (lead vocals), Sean Chapman (vocals/guitar), Matthew McEwan (vocals/guitar), Patrick Salmon (drums), and Andre Davis (bass) before their show at the Brick and Mortar in San Francisco to hear about life on the road, the Warped Tour, and what it’s like to be “leaders of the new school” sound coming out of SoCal.

How does your name, Tomorrows Bad Seeds, reflect your music and your mission?

Moises: Well, part of it is taking the term “Bad” in the sense of Michael Jackson’s Bad, turning it around into a good thing. "There’s a saying, “No room for rockstars” on the tour. It basically means there’s no egos; we’re all here trying to do the same thing so let’s help each other out."We certainly don’t have a negative message. At the same time, it’s also making a mockery of the term “Bad Seed”, which generally means the outcast or outlier because we’re out here trying to push through and make it. A lot of people write off musicians as lazy but we put the work in and we’re trying to make a living out of this just like anyone else.

How did you guys first link up?

Moises: Actually, the group started out as a tagging crew in Hermosa Beach. As our love for writing and performing music grew so did the group which is what it is today and we slowly built up a fan base.

What are some of the challenges of being on the road for so long?

Matt: Well, we’ve been on the road for the past 40 days straight and the hardest part for me is just being away from my family -- I have two kids and I think about them all the time.

Patrick: For me it’s just staying healthy. It’s tough to get healthy, cheap food on the road, especially when you’ve never been to some of these places. But also trying to not party too much and get good rest.

Who are some of the artists that have influenced you over the years?

Moises: Professionally, touring with the Wailers in Jamaica was an incredible experience. But we’ve played everyone and we love everything, from punk and hard rock bands to super roots reggae acts like Katchafire and everything inbetween we’re down with it, dubstep, whatever.

Matt: Fusion is the evolution of music, so we like to think of ourselves as a melting pot of styles. Mixing the different styles of music we like to play keeps things interesting for both us and our audience.

I understand you guys are on the Warped Tour again this year. That must be some wild ride, what’s that like?

Moises: Well, for starters, when we first started doing Warped Tour a few years ago, we were pretty much the only reggae band on the bill. Now there’s a couple more reggae-influenced bands joining the tour, so it was cool to kind of usher that in. But honestly, no matter what the style of music, there’s such a great vibe between the musicians. There’s a saying, “No room for rockstars” on the tour. It basically means there’s no egos; we’re all here trying to do the same thing so let’s help each other out.

Adrian: There’s even a lottery of set times, so no one gets stuck with the same slot for the whole tour. The good set times vary from show to show, so everyone gets a chance to get the best crowd.

Matt: Yeah, everyone’s out there busting their asses making the whole thing happen. I really felt for our sound tech, ‘cause it’s like setting up a circus everyday, and he was up at 6am getting our gear out of the huge semis that cart everything around.

The group was great to chill with and I thoroughly enjoyed their energetic set.  They started things off strong with some of their upbeat rock tunes like “Reflect,” a song that kicks off with a hard reggae verse before taking things up a notch for a distortion driven chorus.   On guitar, Matt and Shawn effortlessly switch from keeping the skankin’ rhythm, to hard-driving power chords, to melodic rock riffs and then top things off with screeching solos that’ll give you goosebumps.  Matt particularly stands out by playing his guitar upside down the entire show.  Andre keeps things groovin’ on the bass, with funky-upbeat lines on songs like, “Only for You” and smooth reggae riddims on the bands latest single, “Nice and Slow.”  You can’t miss Patrick on the drums, who seems to be locked in permanent head-bang mode, with the long hair to match.  He displays his versatility by being able to keep the group on track while switching between so many styles.

While Tomorrows Bad Seeds take a modern approach on blending ska, punk, hip-hop, and reggae beats, make no mistake that these guys know their roots.  The group took the middle of their set to get the crowd dancing hard to a mix of some of their more reggae-heavy tunes and some classics from the golden ages of reggae.  Their reggae chops set them apart from a lot of up and coming acts in the scene today.

The crowd was definitely feeling the vibes in the Brick and Mortar that night, with Pacific Dub setting the tone at the beginning of the night with their upbeat brand of dub reggae.  Definitely look out for these SoCal young guns on the road; their positive vibes and energy on stage were the perfect mood-setter for the night and with songs like their new single, “Best of All Time,” expect to see them making a names for themselves in the next few years.

Tomorrows Bad Seeds is getting ready to release their next studio album, which according to Moises took them “40 day and 40 nights” at the renowned Vil