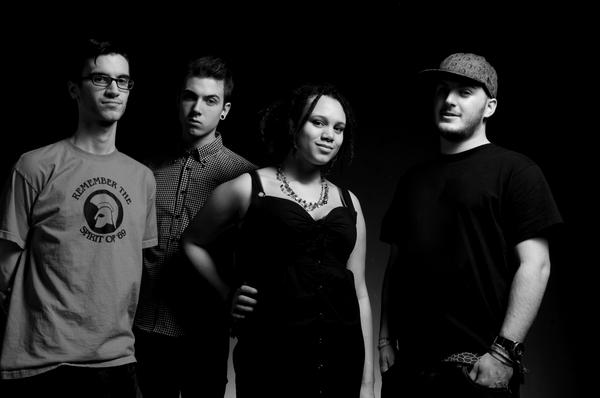 The Skints Interview
by Michael Cotton

The Skints are a four-piece reggae/punk/rock fusion band from London, England and are continuing the UK’s traditional love of reggae, punk and dub mixed with influences from the best of the USA punk and reggae scenes.

Many bands dream of opening for a band like Sublime W/Rome but to find out you are doing so just a few days before the show must be something else. Well the Skints did just that.

I’m sat down in one of the many small, cramped dressing rooms which litter London’s Shepherd’s Bush Empire, to have a quick chat with Josh Waters Rudge, 20 year-old guitarist of London’s very own The Skints.

Josh has just finished his soundcheck and is set to take the stage in less than half an hour, for a bloke who is just about to play what is possibly the biggest show of his life. So far he is remarkably calm.

I start by asking Josh about how he feels opening up for Sublime W/Rome.

“We heard a rumour we might be asked to do it, and I was like fucking hell you must be mistaken.” said East Londoner Josh.

As it turned out The Skints got the call on Tuesday (with the Manchester show on Thursday) to confirm SWR said yes, they wanted the Skints to open their UK shows.

Josh said Sublime (and SWR) influenced so many bands in the reggae/rock scene, even the Skints whose members would have been about five when Bradley Nowel passed.

“Even when we were making our album we referenced them, great band.”

The Skints have been touring constantly for over a year in support of their debut album, Live, Breathe, Build, Believe – a title which wouldn’t be out of place on the cover of Tony Robbins latest self-help book.

Josh said things are getting bigger for the Skints, touring Europe and UK to support the album.

“Live, Build, Breathe, Believe – it’s about the band, about the music,” explained Josh. He is clearly a bloke who does live and breathe  the Skints and his enthusiasm for the band is infectious, you only have to see the four-piece play live to see how they whip the crowd into a frenzy and then slow it down again with some roots reggae. The Skints are a band who punks and reggae heads can get together and enjoy in equal measure.

The Skints met at school in East London, Josh and Marcia Richards (vocals, keys, alto sax, melodica, and flute) have known each since they were five-years-old.

“We (Josh and Marcia) went to the same school as Jon Doyle (bassist) and Jamie Kyriakides (vocals and drums) – they were a couple of years older.

“The band got together when we were about 14 or 15. We got together listening to Sublime and Operation Ivy, bands like that.”

The Skints are a hybrid band, a band who share vocal duties. Josh, Jamie and Marcia all sing, something Josh puts down to the person who wrote the song wanting to sing it. He explained that 80% of the time who you hear singing actually wrote that part of the song.

“Sometimes I’ll write a tune and think if it would sound better if Jamie or Marcia sang the chorus.

“We don’t really write in the conventional way, all the songs come together differently.”

It’s a tactic which is working well for the Skints, the harsh vocals of Josh and Jamie are complemented by the softer more delicate vocals of Marcia.

It’s time for Josh to leave and take the stage to open for SWR but I had time for one last question. When will the band treat the US to the magic of the Skints?

“It’s something we would love to do, we have played with countless American bands and every one of them keeps telling us to come over.”

There you go if you want the Skints, they are willing and ready to launch another wave of great British reggae-rock in the USA.