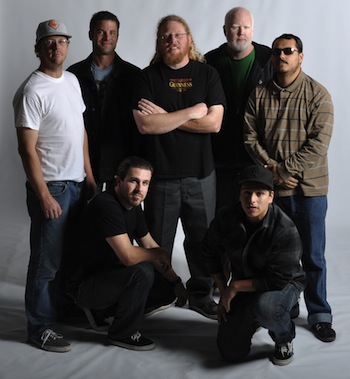 As the sun dimmed in the late afternoon Denver sky, the bass thumped from inside Cervantes The Other Side during Rootz Underground’s soundcheck and The Simpkin Project welcomed me to their van out front for our own pregame session. With all seven members plus myself hanging out in the extended white van in front of the venue, we discussed the state of Reggae today, good friends, new music and the Cali-Roots Festival!

First off, how does it feel to be opening for Rootz Underground here in Colorado, have you guys played here before?

Wow, it’s super cool man. We only met those guys real quick, they just flew in from Jamaica, literally fresh off the plane! Rootz Underground has been nothing but cordial, really cool guys. They’ve been together for a long time and we’re stoked to be playing with some really good musicians. They’re nice guys too, we have a couple more shows with them so totally looking forward to it.

We haven’t been here (Cervantes) but we’ve played The Marquis Theater (Denver) before. Two years ago our good friends the Dirty Heads took us on the road and that was our first time in Denver. Those guys are really good friends of ours, we actually grew up together in the same neighborhood, same high school. All of our brothers and our friends, friends of our brothers, all that… really good dudes! Success has come fast for them but they remain just as cool, we really appreciate them a lot."We’ve seen our genre go from being niche to mainstream kind of out of nowhere."

Tell me a little bit about what you guys see in reggae today, coming from SoCal and out on the road touring….

We’ve been doing this project for about 7 years now and just in that time we’ve seen it grow a ton. An example is that Rebelution and SOJA played in our small town, these little bars and we as the hometown band opened up for them. Now, look! That same show we played with them way back when, the next week the lead singer Eric (Rachmany) wrote us a comment on Myspace when Myspace was “The Facebook”, saying, “Dude, love your album it was nice to meet up with you guys”. They were always cool dudes so it’s just insane to see them in a tour bus, doing these massive shows, sold out shows across the country. That right there is one example of just it all can change super quick and how we’ve seen the scene grow.

What do you think is a reason for that noticeable growth of Reggae?

I think because it’s so multi-verse, the “Reggae” genre reminds me of a house with many rooms. Everything is kind of under this big blanket but there’s a lot of different rooms to explore. There’s reggae with rock, reggae with rap, dancehall, lovers, pure, roots reggae, Cali reggae, almost a sublime derivation reggae, new wave, old wave, dub step, it’s just like hip hop there’s just so many styles!

We’ve been doing the same thing for years now, we play kind of a more Jamaican model standard reggae, more natural vocals and content from our area and our time. Now, our style also blends with this new kind of “surf roots” genre. The scene itself has helped us out even though we don’t necessarily identify ourselves 110% with the “scene”. All those guys are so cool though, we love and respect them as people and as bands and the music too is so good, we’re just different as we’d say. The reggae mindset now seems to be that gluing piece, that one element that can combine everybody. It’s really nice that it’s so cohesive, their fans are drawn to us and ours drawn to them, it’s a good symbiosis that way.

With the blending of all these styles, do you think the mindset then has a lot to do with the lyrics?

That’s one thing Phil put a lot of emphasis effort is the lyrics because there is meaning behind it. That’s what we really have in mind, is the message. If it’s a realistic, practical message that can be applied and lived through the people that are listening to it and feeling it, that’s what we’re always keeping that in mind. Sending a positive message to the people is a powerful thing and we definitely want to promote that.

I think there’s a lot of people who are also attracted to the idea of it, the lifestyle and maybe the partying aspect but not so much into the music. But, it’s still fans coming to shows and every time more may be sinking in and in that way, it grows. Of course, there are those fans that are really into the music, much like Dead Head fans, Phish fans, and Rootz Underground fans. Those people who work to get others to go to shows, spread the music and definitely see the artists live when they come through touring. It’s trippy to see the difference in these places show to show and it’s great that it’s getting all this attention.

Technology obviously also plays a role in this, what are your thoughts on that playing a role?

I think that’s like the Phish crowd, Phish is a model that I personally like (Shawn Taylor). They’re a band whose model, as far as their attitude, I really like. They’re so focused on their f