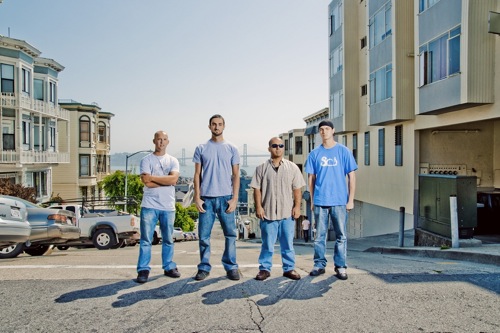 How did The Release start out?

Louie Sehgal: Brian, Ross and I went to the high school together. I jammed with Brian a lot but we never really knew Ross. Then Ross and I ended up rooming together in college. I introduced Ross to Brian and we basically formed the band.

We went through a few different bass players before we found Danny. We have been playing gigs together for about 2 years now.

Brian Coe: Yeah, same as Louie basically. Some ideas formed in Chico when I began playing with my buddies up there.

Describe the sound of your music to our readers.

Brian Coe: It sounds like dancing on the beach. Rock and reggae riffs come and go with attractive transitions, but it's mainly just music that will make listeners feel hunky-dory.

What bands influence your music?

Louie Sehgal: In terms of drumming, I am influenced by many different drummers and their techniques and styles of playing. My favorite bands were Primus, Incubus, Chili Peppers. Lately, I have started listening to a lot of house music and I am really enjoying bands such as Muse and Phoenix, but still relate back to older performers such as Tom Petty and Metallica.

Brian Coe: Many bands located around California. From Joe Satriani, 311, Offspring, and Sublime to even Chris Isaak--who woulda thought.

The debut album “Whole Night Through” was released in late 2009. Tell us about the album?

Brian Coe: It was our first produced album and it took us about 5 months to do. We learned a lot about ourselves as a band and how we work as individuals with our instruments. Next album we would like to be in an actual studio; this first album was done all on a laptop computer. 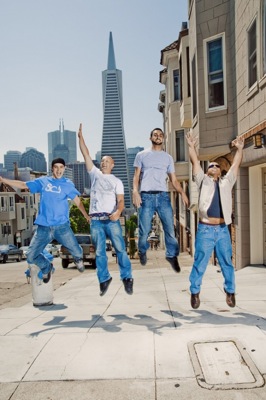 Are there any plans to work on a new album in the near future?

Brian Coe: If the fans want more, we will give them more. Writing songs is very important because it kind of takes a snapshot of my life during the creation of each song--each a different characteristic and energy. Oh, there will be more.

Louie Sehgal: Yes, we've been writing some new material lately. It gets difficult because we play gigs during the writing process, so it can be challenging to write and rehearse at the same time. We have a few new songs we've been playing live lately and a few more that we'll be debuting live soon.

I noticed the first album was produced and distributed by yourselves. What are the biggest reasons for taking this route?

Brian Coe: Cheaper and it put more of the decisions and creative power in our hands.

Louie Sehgal: Yeah, the album was completely self-produced and recorded, which was pretty much just to save money. We were confident that we could record and produce an album on our own that would sound as professional as any other debut album out there, and I think we succeeded. We basically recorded it in a portable studio in a warehouse. Ross produced and mixed the entire album himself, which was a painful process. We will NEVER do everything ourselves again. We're planning to record our second album in a more traditional studio where we won't be in charge of every single aspect of the recording process.

I know it is a huge risk to just pack up and go out on a national tour. Leaving behind jobs, setting the whole thing up, money for the road, and so many more issues. I think with the internet many bands don’t think it is as necessary as it use to be. What are your thoughts on the issue?

Brian Coe: Live performances are the most important part. As a vocalist and front man, I am constantly learning during each live set we do. There are numerous techniques that I have yet to grasp. Albums on the Internet are always nice to have on the back-burner, but I believe a band's live performance can win over fans, thus going on tour and spreading our sound through live shows IS a must. It's a risk, but you never know 'til you try.

Louie Sehgal: Nothing really compares to live music. Every show is different, so watching a band perform is a unique experience for both the audience and the band. We're living in a digital age with a poor economy, however, so it is difficult to support yourself on tour as a new band. A lot of up and coming bands like us just don't have the funds to go on tour, even though we would LOVE to. It is something we want to do sometime in the not-too-distant future--we're just waiting for the right opportunity to arise. "Live performances are the most important part. As a vocalist and front man, I am constantly learning during each live set we do."

The Release are from San Francisco, I love that city. How is the music scene for local acts out there?

Brian Coe: Playing around here with