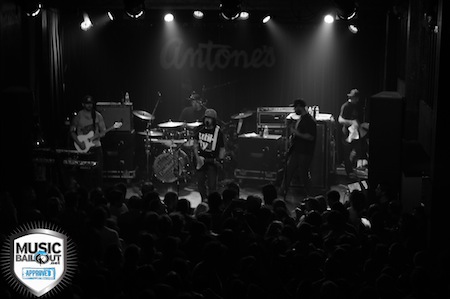 The Expendables are reggae/rock veterans who have used their hybrid fusion style blend of genres into a bridge for a diverse, yet passionate fanbase. Fans of metal, dub, reggae, surf, rock, ska, and punk can all find something to love about this Santa Cruz crew. Catching a live show of theirs is always a treat and the ever-touring band manages to keep up the energy every single night. Seeing them at Antone’s in Austin this past Thursday was a treat. From massive circle pits to slow-dance grooves, The Expendables turned Thirsty Thursday into a raging night. Fans of all ages filled the venue.

Openers Pacific Dub turned many heads with their pop reggae tunes and got the party started while local opener Don Chani worked the room as it filled. Pacific Dub appear to be a bright young group with great on stage chemistry, bound to go far. Bands like these guys show great hope for the future of the genre. Their set included songs such as “Tightrope”, “Wasted”, “Sundown”, “Dreaming”, and “Close to You”. They closed out their set with “Utica”.

By the time The Expendables took stage and started playing “Down, Down, Down”, the entire room was hyped and packed like a can of sardines. Favorites from old to new appeared throughout their set. Songs like “Tight Squeeze”, “Let Loose”, “Burning Up”, and “Get What I Need” all shared their time in their well put together set. “Sacrifice” closed the night with the perfect rollercoaster ride of dynamics leaving smiles on the face of every member of the captivated audience as they walked toward the door. The crew hung around the merchandise table after the show to spend time with their fans. It’s obvious these guys love what they do, and we love them for that.

We had a chance to speak to frontman Geoff Weers before their trip to Austin to ask him a few questions:

Any progress on Ryan’s recovery?

Eric Walsh from Pour Habit filled in on bass for the last tour. How was that?

We’ve been friends with their band for a while. It was an easy choice to have him come in because personality wise he fit our band very well. 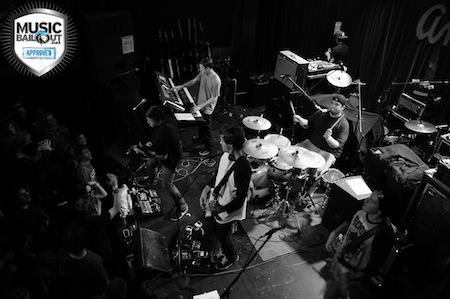 Any time you change your facial hair people are going to ask questions. Did you want to talk about that at all?

I woke up one morning and it was all tweaked out. I thought ‘you know what? It’s time for me to shave it.’ There are too many mustaches all over the place now days. Too trendy, so it had to stop.

You just released the acoustic gone soft album, any future plans for any metal or dub albums or anything like that?

Gone soft was sort of an experiment to see if we can record some sort of album in our home studio. It worked pretty well so we’re thinking about moving on and possibly doing a lot of electric stuff. That’s definitely a possibility. We’ve definitely put that possibility out; creating a metal album, or a straight-up dub album. With our studio I think that will be more of a possibility because we’ll have all the time in the world to work on something like that. Let’s hope in the future we could do something like that. I’d be excited to do it. Nothing planned, but it’s definitely an idea that’s floated around our heads for sure.

Are you recording the new album in that studio?

We’re going to try. We’ve got a lot of songs already for the new album. We want to somehow record part of it in our home studio so we don’t have to spend a butt load of money in another studio to get same results. We’re working towards possibly being able to record full albums in our studio.

You’ve been asking fans for name ideas for the new release on your social media. Has anything stood out to you yet?

Any new songs right now that you’re really excited about?

All the new ones are really fun to play. I always like playing new songs, but there are a couple new ones that people have already heard. We generally take our new songs out on the road and play one or two of them to get used to them and get comfortable playing them live. The ones we’ve been playing live have gotten a pretty good response. People already know the names of them now. There’s one called “Zombies” that people actually request. That one has got a lot of hype around it so we might put that one out before the rest of them. I feel like a lot of the other songs are really awesome. I’m excited for it.

Are there ever any drastic changes between when a song first starts when it makes it onto the record?

This time around we practiced a lot before we got on this tour. We did a lot of writing. Pretty much from the first of the year until we started this tour we locked ourselves in our bedroom and just tried to pump out as many songs as possible. That’s where a lot of the drastic changes take place. This time around we haven’t made many drastic changes live. When we start recording them, things may change a little bit, but for the most part these songs are pretty much done.

The music industry is changing with services like Pandora and Spotify. How does that personally affect The Expendables?

Services like Pandora don’t really pay a lot of money to be honest. You have to get a lot of plays for a song in order to receive a substantial amount of money. It’s kind of a bummer for us to not see a lot of