Duddy B of The Dirty Heads 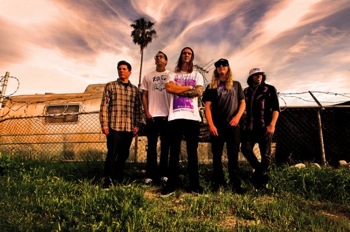 With such a diverse background in music what was your first live music experience?

My first live music experience was with a punk band that I played with in high school but that was so long ago that I can’t remember that far back, haha. My first live show with The Dirty Heads was playing with Surround Sound back in the day."...we have a lot of new music that’s already written and we’ll probably try and put out some sort of EP this summer even if it’s just free online or something..."

If you had to choose, which two musicians/groups would you say are your biggest influence for writing your music?

Definitely growing up what I was really into was Beastie Boys and Sublime that was it and all I listened to for so long. Then it grew into listening to a lot of classic rock and with listening to Sublime it started leading me into older reggae. I listen to a lot but when I really started getting into music and started writing it and loving it, it was just Sublime and Beastie Boys and that was it. As of now It’s hard to narrow it down to just two artists, I just listen to so many things and there are so many good artist out there but I would have to say Pandora helps and is my first influence. I love Pandora because it’s just a great way to find new artist and all that good stuff and it’s perfect because you can listen to multiple artists.

On the track “Everything I’m Looking For” the second verse mentions your parents, how supportive were your parents with your choice to pursue music?

They were always super supportive, anything we wanted to do they were down and they would always help out. In the two different houses that I lived in growing up my dad actually built sound proof rooms for us in our garage so we could jam. That really helped out a lot because we were jamming at 4 in the morning and the neighbors couldn’t hear it and it was awesome. It definitely helps out a lot when your parents are supportive of what you want to do. You have a brother who plays in a group called HB Surround Sound, can you explain a little about them?

He’s my older brother so they were playing back in the day and he’s one of the reasons we started playing. They are a little bit more ska and have an Operation Ivy/Rancidy kind of sound, so they’re a little different then we are but definitely cool. They’re trying to re-spark it they just released a new sampler that can be downloaded for free on their facebook page and they’re going to start touring again and all that good stuff so people should definitely keep an eye out for them.

With you and your brother both in bands does music run in your family?

Well it’s just me and my brother so he’s my only sibling. There is no one else who really did music seriously in my family, I mean my dad can play a little bit of guitar and my mom has a pretty good singing voice but that’s about it.

In the spirit of brotherly competition who do you thinks’ the better musician?

Hahaha, well I think we are both two totally different musicians and that’s all I’m going to say haha.

When you first established the band and the Dirty Heads were an up and coming band can you describe any negativity and/or pessimism you encountered and how you over came these obstacles?

I mean never anything over the top negative or anything like that has really happened. When we play shows most of the time people there are into it so we’ve never really had anybody be super rude. I mean there is the obvious shit, like reading rude comments online or whatever, but my attitude towards that is that I don’t give a fuck. I’m playing music regardless, I play it because it is fun and I love it so I don’t give a shit haha.

The Dirty Heads have played with so many different genres of bands such as rock bands like Deftones, hip hop groups like Cypress Hill, Reggae groups like Tribal Seeds and so on and your songs always have a different feel to them as well. What genres (if any) would you classify yourself under?

Well I guess we get thrown into the whole Reggae/Rock genre because that’s just what most people throw us into but I don’t know it’s hard because we do blend so many different styles of music together. Really I just think of us kind of as a Rock band you know because we just go up there and play music and it’s really just whatever when we’re up on stage. Haha whatever we feel like playing that’s what we’ll play.

Rolling Stone called you one of the best up and coming bands of 2010. What do you think it is that sets the Dirty Heads apart from other bands?

I don’t know, that’s a good question haha. I think it helps a lot that we all grew up together and we’re good friends so we get along good and just have fun. So I think that has a lot to do with it because it’s how the fans portray us when they come out to the shows. They see us having fun and having a good time up on stage and it’s almost like that energy/vibe is transferred to the crowd and they can just let loose as well. That’s really the power about music, it’s not just something you listen to it’s something you can feel too. It’s like a lot of bands now a days are writing emo/scream-o/sad/depressing stuff and when fans listen to that it’s almost like they feel that way too. I think people are just ready for happy music again and that’s what we aim for, to make people feel happy and positive and I really think that helps us out in what sets us apart from other bands.

Any Port in a Storm was released in 2008 and then the special edition was released last year in 2010. With such a long period of time without a release can we expect a new