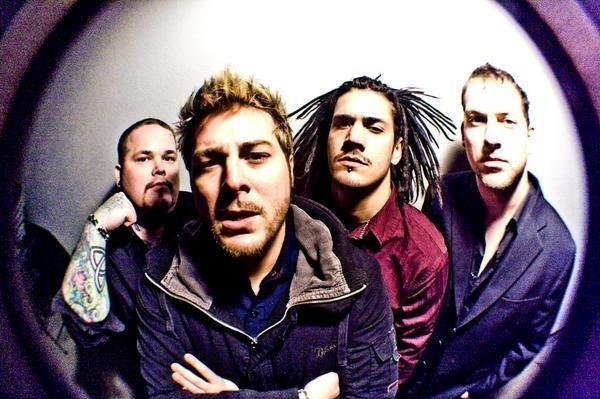 I am upset that Souldub flew under my radar for so long. How long has the band been around and what’s the Souldub story?

We all met on match.com. It really works! The Souldub project has been about four years in the making. Not until recently did we feel ready to really release this project outside of our little home state of Michigan. We define our style as “Dark Reggae” - most of our songs are written in drop-tuned instruments and minor keys, which often gives our brand of reggae a more eerie sound…oh and we like to throw a little metal in the mix once in a while. We have been privileged to gain a great loyal following in Michigan and we are excited to start rocking around the country this coming year.

I am loving the debut album Catchabuzz. It was intended to be a side project but turned into much more than that. Please explain?
We have been crafting a “debut” album over the last couple of years, but have not completed it yet. We were selling out shows, but had no music recorded for our fans to take home with them. So a little over a year ago, we decided to do a little side project that we could give to our fans as a thank you for sticking with us. The idea was that each member would contribute a few random songs of any genre and we would record it and package it as a mixtape. It’s funny because we planned on spending a month on it, and instead took a year to record the thing. We just kept getting new ideas and the songs transformed over and over again. The end product was Catchabuzz…the debut album leading to the debut album…we are retarded.

Its really tough when labeling the overall sound to Souldub. Is this something you are aiming for?
Souldub’s songs are written by three men with three very different musical tastes. Shane is into dubstep and trip hop, Dave is inspired by flamenco and dub, and I love reggae, soul, funk and hip hop. All of us come from rock backgrounds and all of us love old west coast gangsta whines (like the super high synths on old Dr. Dre songs). We give each other a lot of creative space to put our individual influences into these songs. We went through years of trying to box ourselves in to a particular “sound” - but it didn’t work. We hated each other. Once we began to cater to each other’s styles, we really began to feel satisfied with our music…and people started to notice it as something fresh and noteworthy.

I quote you when saying “In a music scene overpopulated with trendy, carbon copy rock bands, .…”. I completely agree. Do you think it’s bands taking the easy way out hoping to be that quick hit or is it more of ignorance is bliss?I think all good musicians can quickly figure out the “format” of a pop song. We went down that path for a little while and realized that there is nothing worse than everyone in the crowd yelling out the name of your radio single….when it’s the last song in the world you want to play. If you don’t play it… your crowd may not soon forgive you…but when you do play it, you feel like a whore. A few of the songs on Catchabuzz were produced by Al Sutton (Kid Rock, Snoop Dogg). I was talking to him on the phone one day and he said something to me that greatly changed my perspective on this topic. He said that Rage Against The Machine did not make songs for radio, neither did Nirvana or Sublime. These bands had an energy and freshness to them that created an overwhelming demand that the radio could not ignore. I think that the rock-reggae genre is on it’s way to becoming “in demand” and the band’s who you will see rise out of that will not sound like Sublime, 311 or Slightly Stoopid…they will be bands that bring something fresh to the table.

The album has many guests giving their Souldub endorsements, Passafire, Matisyahu, and State Radio to name a few. Was it difficult getting them to appear on the album?
We had the privilege of playing with Matisyahu and State Radio…so we spent some time with them and told them what we were doing. Those cats are great down-to-earth people Truly an example of what a “Rock star” should be. They were happy to contribute. On a side note: Matisyahu and Dub Trio (often Matisyahu‘s touring band) are huge inspirations to Dave and I. The guy’s grooved to our entire show and we were so excited to perform for them. I felt like I was in the presence of Elvis or Michael Jackson or someone legendary like that. I really desire to do a song with Matis. Maybe we will try on the next record. Passafire was playing a show with Rebelution at The Blind Pig in Ann Arbor, which is like a second home to us. I called Ted (Passafire) and asked if we could buy them dinner before the show and just kick it in the green room. There is so much to learn from these guys. I recommend that any local band make an effort to spend time with your influences. The education is priceless.

Black Rose is a sick song from the album. Would you please give some insight to the background on the song?
Thank you. I think we all dig this tune. Maybe one of the only songs on Catchabuzz that people will throw us in the rock-reggae category for. We were actually remixing our own song. Shane, Dave and I had written and recorded another version of the song about five years ago under a different band name. Funny thing is that I wrote the lyrics based off of a Barrington Levy tune called Black Roses. So this song has been regurgitated a few times. It was fun to have our friend Dr. Sketch (who also recorded/mixed most of the album) dropping some old school vinyl cuts on the tune as well. 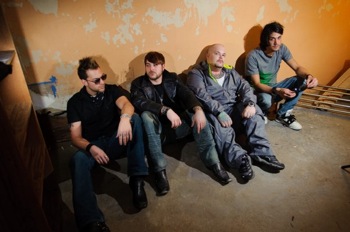 The cover art to Catchabuzz is really killer. Did you guys do your own artwork for the album?
We are so fortunate to have some fans in the creative field. It’s an awesome privilege when our art inspires other artists. We have to stick together people! The artwork was done by our friend Jason Felde. He spent three months working on it. He actually just surprised us with it. He didn’t charge us a dime….which was a huge blessing because we didn’t have any dimes to pay.

What can people look forward to in the future from Souldub?
The real debut album. I’m talking about some groundbreaking, mind blowing shit. We are working our asses off on these tunes, and I am proud to say they are like nothing you have ever heard come out of the reggae genre. We will be recording a little bit at a time, and I think this time around, we may release some of the material as we go. We are al