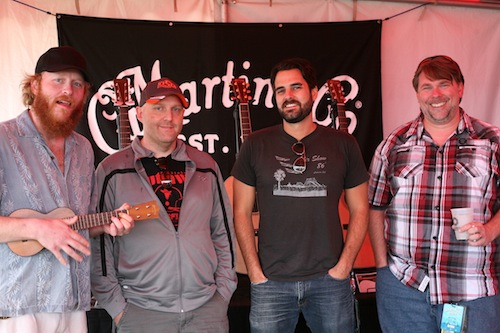 This was probably one of our favorite interviews. Talk about a group with history, talent and direction. They know what they're doing and they're happy to share. Their ability to provide insight and details from recording to their customized on-site light displays was enthralling. Regardless of their celebrity-type status with festival-goers, they were completely down to earth and enchanting. You can tell they plan to continue to do their thing, they way they envision it and are happy to be in their own driver's seat, so to speak. They are their own managers, and from what we can see, they are doing just great that way. Congrats to this group for their flawless performances.

Do you interact with other guests on Jam Cruise?

Matt McDonald: Yeah there is no real backstage. There is one media/artist area for a quite place to do interviews, but other than that there is no artist area.

Do you stay the whole time on Jam Cruise?

Matt McDonald:  We’ve always stayed the whole time, some artists fly back. It does make it difficult to do anything afterward.

Where are you headed next?

Matt McDonald: We have a couple of weeks off actually. We are getting ready to record a new album so we’ll start preparing everything at home for that… start making the album on our own. On different scales, we all have our own in-house studios. We all know what we’re doing at this point. We’ve all been doing this for years. Instead of having a producer say, ‘I think you should do it this way.’ We’ll bring in a fresh set of ears after we’re done recording when we reach the mastering part. Someone whose opinion we trust.

How long will the entire recording process take?

Matt McDonald: Most of the summer, probably even into early fall. We’re hoping for a November release for the album. We want it to be more than just the basic album. We’re going to model where you give it away, or people can donate, but then we’ll have different tiers, where we have the special additions that has more songs but also a documentary, posters that are signed, add more and more features for the hard core fans. One of the things we want to do with the digital downloads is have the liner notes that you don’t really see that often anymore, that used to be inside the album. But we’ve had a pretty generous offer from someone well known that has offered to do the liner notes for us so we definitely want to make that part of the digital package as well. We manage ourselves for the first time, so there’s nobody telling us what we can and can’t do. 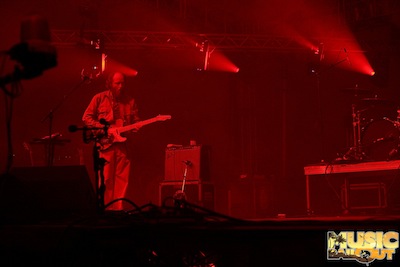 How does it feel to manage yourselves?

Matt McDonald: Awesome. Honestly, I think all of us were a little nervous at first, but we have a great booking agent, we have an amazing publicist and really that’s all we need.

Albert Suttle: We’ve been doing it long enough that we more or less know what’s going on. Knowing is half the battle….the more you know, knowledge is power.

Is there someone who takes the lead on the song transitions, or is it organic?

Brock Butler: What we do right now is write the set list out and talk about the transitions on the set. We’ll discuss if we should we go right into it. Some songs could have a very long section that we can let build, but when you are on time constraints, we just go right into it, so most of that is worked out ahead of time. Especially in a festival setting when you want things to move.

How is the set different at festivals versus intimate shows?

Albert Suttle:When you have a show that is playing for three hours, you can ease people into it, but at festival you have to just go or you got to hold them or they will walk away.

Brock Butler: It’s a real trick to not be too aware of time and also, last night we had some things getting switched over from the band before us, and there were a couple of things that add time transitioning. Instead of just plugging in and going, it felt more like trouble shooting.

Do you prefer a festival or private show?

Matt McDonald: There are pros and cons to both. What I like about festivals, we come in a lot more aggressive right off the bat, versus a normal show where we have two sets and we try to setup the full Perpetual Groove experience. Here we are part of dozens of other bands, so we just try to do what we do best for 90 minutes. There are pros and cons to both. I like at a real show that we have time to get there early, set up, and bring in our production and no stress as far as getting everything right in the monitors.

Brock Butler: One thing I do like about a festival like this is all the other bands performing pushes us. You can’t just go up there and go through the motions because everyone wants to bring their A game. If it’s music you like, it translates into our own set as well.

Albert Suttle: Music isn’t’ inherently meant to be competitive, but we’re human beings, so we’re going to go out there and play. For musicians, when you are at a festival the other bands bring their A game too, they may be wide eyed, but they