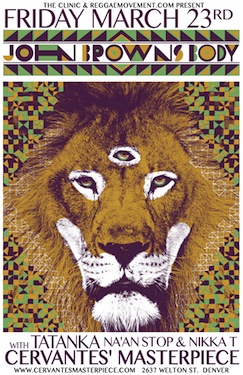 On Friday night at the historical five-points in downtown Denver, I caught up with Tommy Benedetti, Drummer and one of the founding members of John Brown’s Body, for an in-depth interview covering the bands current tour, news on their upcoming album, and an all encompassing look at how they remain one of the top live acts, representing “Future Roots” for almost two decades. These are living legends! Check it out!

Breckinridge was good it always gets really crazy down there at three20south (venue). It’s a tight room, a tiny underground kind of place and it gets packed in there, it gets crazy. A smaller stage but we actually love playing shows like that. I love the energy of a 300 cap room when it gets really full, it’s nice. We’ve been going there for years; it’s a cool spot Breck’s awesome!

I’ll have to check that out, awesome! So tonight, Cervantes Masterpiece Ballroom and you guys move on to Utah over the next couple days, how did this 6 show Colorado / Utah mini-tour come about, are there future dates to be listed or are you headed back East?

Right, so it’s 4 in Colorado and 2 in Utah, Sunday we’re playing a big outdoor show at Park City, Sunday it should be awesome. We’re kind of in the middle of recording a new record right now and that’s where a lot of the focus and energy is being put towards. So, we’re not going to do extendo-world tour until we really get the record out and can tour behind it proper. We’ve been touring behind “Amplify” for almost 3 years so it’s imperative that we get the record out. Once that comes, we’ll do more touring but right now we’re doing short little blasts, we fly out and fly back.

We’ll do that in different parts of the country, in May we’re headed down to the Southeast toward Ashville, NC which is a great place. Then we’re doing a bunch of shows in the Mid-Atlantic area, Philly, Baltimore area, it’s good. These are places we’ve been going to for many years so we have a lot of friends and people down there so it’s great. "At this point with this lineup, its easy. Everybody is fully dialed in and the chemistry has never been better."We’re trying to balance keeping the band out there and working but also really focusing, we know the new record is really important to get out before we can really put it back into full gear.

So, on this short tour how are you guys moving about right now, a bus or a couple vans? With the 8 band members, sound engineer and all the equipment, I feel like things could get a little tricky, have you guys ever left anyone behind?!

We’re traveling by a 15 passenger van right now because we flew out to Denver. I don’t think we’ve ever left anybody behind but we’ve all gotten held up in various positions in airports or all sorts of crazy situations. We haven’t had to pick up anybody to fill in but we’ve had to play shows without one of the horn players, sometimes that happens but we run a tight ship (laughing)! There’s always next tour for that!

In a follow up question about the sound engineer Jocko, Tommy goes on to say…

We have a new engineer, Kenny with us right now. Jocko decided to hop off the road for a bit because he has a studio in Syracuse and he’s up there hanging out and doing work. We got a new guy Kenny Christianson. He’s done monitors for us a bunch of times back in NY he’s been listening to us for years, he grew up with the band and he does an awesome job. This is probably only his 5th or 6th show with us but he’s watched so many shows with Jocko behind the board, he knows what he’s doing. It’s fresh and it’s cool and totally still a fill on dub show, Kenny’s great, he’s got the knowledge

We’re lucky when we find ourselves in the position to lose someone who’s important and you go through this situation thinking, “wow, are we fucked?” I mean we would never have gone out without a front house guy, we won’t do that. And Jocko worked for us for about 7 years, he’ll always be family, I’m sure we’ll work together again but Kenny stepped in and he’s doing a really awesome job.

With regards to the core members and the evolution of JBB over the past 15+ years, how has the creative process changed over time as you guys have grown as individual musicians, together as a group and developed your sound? What is the creative process, say forming a song?

The process can be difficult at times, constructing tunes with an eight piece band because there’s a lot that goes into it. Elliot (Martin, Lead Vocals) is responsible for the lions share of the songwriting and all of the lyrics. He’ll come to us with a pretty specific idea and most of the times it’s pretty much a demo with a vibe and the tune almost in finished form. We’ll bring it to a rehearsal and add our little parts, put it together and make it sound like JBB. Eventually we’ll take it to the stage, we’re playing a bunch of new tunes tonight off the new record! The creative process though, it’s a process for sure and everyone lives in different areas, a few of us are in Boston and a couple guys are in NY, it takes a decent effort to get everything coordinated but it’s worth it.

We just try to take our music and just push it. The first three JBB records were very roots approached, and when Elliot took over the whole thing full time (Prior to 2006, Elliot shared Vocals with Kevin Kinsella), the band’s sound shifted pretty significantly around then.

Elliot is really meticulous, he has division! He knows what he likes and what he wants so it’s up to us to interpret that and make it sound and feel organic, like JBB. At this point with this lineup, its easy. Everybody is fully dialed in and the chemistry has never been better. Honestly, as someone that’s been there since day one, every night is a blast.

Wow, Tommy thanks for that insight, really gives us fans a true sense of all members dedication and passion for the pr