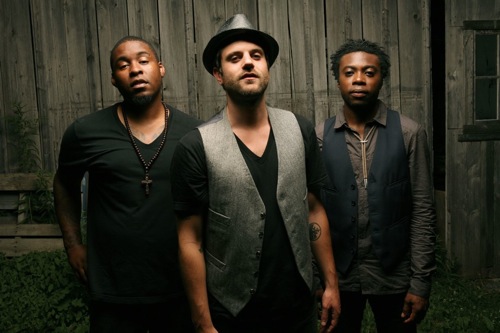 How do you keep the ideas for new songs fresh?

What do you personally find more fulfilling, creating a new record or a successful tour and why?

I'm in the UK right now, and actually just got back to my room from having an amazing experience on stage in London tonight. The feeling of being intimate with a thousand people can be great. But, I really am more of a studio person, I love being in the studio and getting inside a song and solving it in some way. I've never felt all that natural in front of people.

Jay you released your solo record Bright Lights and Bruises in early 2010. Please talk about some of the creative direction you took on that album that is different from a Bedouin Soundclash record?

That record looking back was really an apology record. I couldn't have written the material with Bedouin, because it was about Bedouin and what I turned into personally over a five year period. Touring as much as we did created havoc in my personal life. I changed as a person. I wrote that record for a girl that had to deal with 'it' and me. She was very strong.

What are some of the main benefits in launching your label Pirate Blends Records?

Creative control. We had the opportunity to get our records back, and at this time in the industry we wanted the ability to be fluid and not held down to models that have become outdated. We also wanted to have a platform to help out artists we love and possibly create projects that aren't strictly musical whether it be an art show or film.

Tell us a little about the band Armistice.

Armistice was a record I recorded with Coeur de pirate (Beatrice Martin) and Mariachi El Bronx. I've always thought taking elements that shouldn't fit and putting it together was exciting. That's what we always wanted with Bedouin. Joby (from the Bronx) has the exact same standpoint, so when I called him up about the project and told him I was writing some stuff with a Quebecois chanteuse and wanted to get that mariachi slant he said "fuck yeah". I think those were his words. It was fun.

It is very interesting to find out Jay you are a painter and have done artwork for the bands 3 EP releases. How strong of a passion do you have for painting and does any of your work reflect what you come up with in the studio?

My own work is really really different than what I do for Bedouin. Someone came to a show of mine in Montreal once and afterwards used the word "depressed" to talk about my paintings. I'm heavily influenced by painters like Francis Bacon, Tony Scherman or someone like Christian Boltanski...my work is a bit more harsh. The things I do for Bedouin is more like having a graphic design job.

Bands that write serious lyrics I would assume it can take an emotional toll. I have always been curious when writing your lyrics can it get emotionally exhausting?

It's cathartic for me, it's probably more emotionally tough for people they are about.

Which song has been the hardest emotionally to write and or sing?

"How it comes, is how it goes" or "Remembrance Day" from my solo record were really hard. They both were about acceptance of myself and the reality of my future.

What has been your most humbling experience as a musician?

I worked recently with the St. James Music Academy in Vancouver, which is an afterschool music program for kids who wouldn't necessarily be able to afford to play music or get lessons. They are so talented and have such joy playing. Going down to see them always makes me feel so grateful and inspired. They humble me.

I am sure the wheels are constantly turning creatively. What goals are there that you are still looking to accomplish?

I have a couple more projects that I am starting to write for, and I would like have another record for Bedouin finished by the end of the year. I also am trying to paint, but we are touring a lot right now so it isn't really possible.

What’s the rest of 2011 for Bedouin Soundclash looking like?

Touring, and then getting into a studio in December. We are inspired right now.