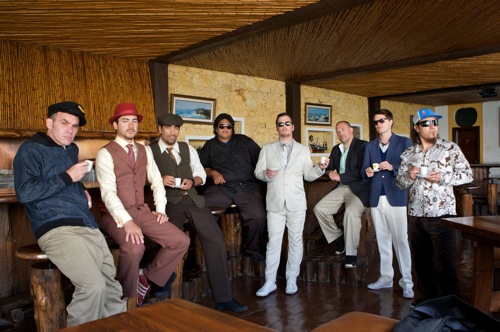 As far back as I can remember music has influenced my life more than any other media that was available to me at the time.  I relate all crucial points of my life to whatever tunes i was vibin' to at the time. Infectious melodies ran through my head more so than math problems, It was easier for me to memorize a song than it was to attend to the previous night's homework.  I found myself obsessed with searching out big fat full sounds.  Once I discovered the Internet, I utilized it to broaden my musical horizons and feed what would inspire me to start writing music of my own.  Now a struggling musician, I am always on the search for the best new sound.  I had a couple of friends visit New Zealand on a study abroad one semester.  They came back speaking of the wonderful place as if it were a haven on earth.  Beautiful weather, people and of course music.  I was told to check out several musical acts from the area.  I had heard of Fat Freddy's drop before,  I  had never gotten into them but my good friend insisted that I do.  I had no idea what i was getting myself into.  For the next two years I would be embarking on endless searches to find the next song or  video, just any type of media I could get my hands on.   They had become an act that thoroughly made an impact on the way I live my life and how I go about listening to music.  I will let you decide for yourself.  The beer is on me if you feel I'm out of place or wrong.
-ChampIAN lead singer and guitar player for Tatanka

What is the story behind the name Fat Freddy's Drop?

The thing about names is that they find you, not the other way around. Someone told me there’s a famous cat with a similar name – a cat with a plethora of bad habits, inhabiting a bohemian milieu. These are themes that suited our younger selves around the time the band got together.

For people unfamiliar with your music, how would you describe Fat Freddy's full sound?

It’s usually better for listeners outside of the band to describe the sound, but I’ll give it a try. Soul-reggae, techno, jazz and afro – ska are mashed together, producing a storm of cataclysmic horns, crazy echoes and conscious lyrics.

With impressive acts coming out of New Zealand like: The Black Seeds, Katchafire and Fat Freddy's Drop, what do you guys have to say about New Zealand's music scene especially in your hometown of Wellington?
The music scene around NZ is very strong in all directions. The thing about being from an isolated and under populated place is that distinctive cultural activity has the chance to flourish. It wasn’t until I had the chance to travel and to take our music to new places and new audiences, that I realized the interesting flavour that NZ music has. In my experience every place has great music and musicians – the same is true of Berlin, Lisbon, LA and Maui – however music from NZ has rather a salty, windy and generally sun-burned character.

We used to tour with Salmonella Dub years ago. They gave us the opportunity to travel to Australia for the first time and we did some great shows together back in the day. Those guys were pioneers and we were definitely inspired by what they did. For anyone who has ever seen Salmonella – you will agree that they will inevitably dub you crazy.

I know that Mu DJ Fitchie is a vinyl junkie, what was anyone in the bands most recent vinyl purchase?
These days it’s a 3 way tie between Fitchie, Hopepa and Choppa Reedz. Fitchie is working on a secret solo project that seems to be constructed largely out of scratchy jazz records. Hopepa is taking us back to school with Oliver Nelson and Shirley Scott. Chopper Reedz is a wheeler and dealer who picks up bargains and then on-sells to obsessive collectors around the world.

What are some of the biggest influences on Fat Freddy's Drop? Is it just music? Is it what is happening in the world or emotions that the band is feeling that day? A combination of all?
On the music side of things we are just influenced by what’s happening at that point in the room where we are working – the way we are playing and the ideas that each member brings. I know that when Dukie goes away to write his lyrics he will consider all of the above and then some.

What is the band most excited about for the rest of 2010 and throughout 2011?
We are excited to be home again after a big year on the road around NZ, Australia, California, The UK and Europe. Looking forward to getting back into the studio and working on our new songs. NZ has had a rough winter and the weather seems to be improving now – so very excited about that!

The band has toured out to the U.S a couple of times. Each time it has been very limited what markets you hit in the U.S. Will there be more US touring? And also will you be hitting more major markets this time around including: Denver, Austin, Miami and so on?
We want to return to the US and go to as many places as possible. So far it has only been viable to visit the West Coast – because it is closer to NZ and Australia. We are an independent group, paying our own way around the world and to be honest the USA is a very expensive place to tour. The cost of procuring visas almost rules it out entirely. The audiences we have had in San Francisco and LA have been incredible, so we definitely want to get back next year if possible.