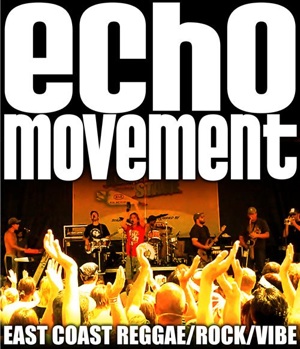 Echo Movement is a band that goes deeper than just playing music for fun, when listening to your lyrics it seems like each song is made to send a message. What exactly is it that Echo Movement tries to accomplish when making music for your listeners?

The band was founded by brothers Stephen and David, what was it that made you decide to start making music?

Stephen: For Dave and me music has been something we’ve been doing since we were little kids and has always been a huge part of our life. Almost everyone in the band has been a musician since they were young.

Dan: For me it was the same kind of deal, I played a lot of different instruments growing up and I have a lot family members playing music all the time. I grew up hearing a lot of odd combinations of music like traditional Irish influence to American folk music and also a lot of Afro-Cuban traditional music so that sort of got me inspired to pick up a few instruments as a kid. Music is kind of a way of life for all of us and it’s all we really know because everyone in this band has been a musician before they can remember.

Stephen: Dan makes a good point, I wouldn’t say music is all we know because half the band is teachers and we all went to college and have college degrees but most of us teach music. Music is the drive for us because it’s something we all want to do and is our passion. Dave and I grew up in a house of music, our parents actually met in a band so music is just something that is in our blood and I think everyone in the band can say the same thing.

Can you describe the story behind the name Echo Movement?

Dave: We are collectively referred to as the Echo generation (or the Y generation) and are successors of the X generation. The initial foundation of the band was kind of like a celebration or a small kudos to our entire generation. The fact that we are the partakers in the advent of the first global village due to technology has allowed us to communicate and communication is the number one most important aspect of human progress. So I give our generation a lot of credit for creating the digital era and I think our generation is fucking awesome.

You guys recorded and released Echo Movement’s debut self-titled album in 2005, can you depict the process of making and releasing that album all on your own? (Instruments, recording process, etc.)

Stephen: Basically it was when we were first starting to develop a unique style that incorporated all the artists that we loved and kind of bunched it all into one genre and in the end the result was the formation of Echo Movement. Dave started writing some music and I started writing some music and we basically sat down and analyzed what kind of sound we had and realized that it was a very unique sound, a sound that only we had. When we started to actually lay down some tracks we both got very excited of what we had. That whole first album was an experiment though, we went into recording with the idea in our head of let’s just play some music and see what happens.

Dave: That album was extremely experimental and we did not have nearly as much direction as we do today in part due to the fact that it was just the two of us. I mean we’re not really even the same band anymore and if you listen to our music now it’s really a completely different band. The lineup of musicians now is the sound that we ultimately felt best represented what we wanted.

The self-titled album features one of my personal favorite Echo Movement songs “Red Sunday”, can you explain a bit on the inspiration behind the creation of this song?

Dave: “Red Sunday” was written in 2004-2005 and the inspiration came to me when I was going over a bridge over a bay in New Jersey and the melody was actually an e