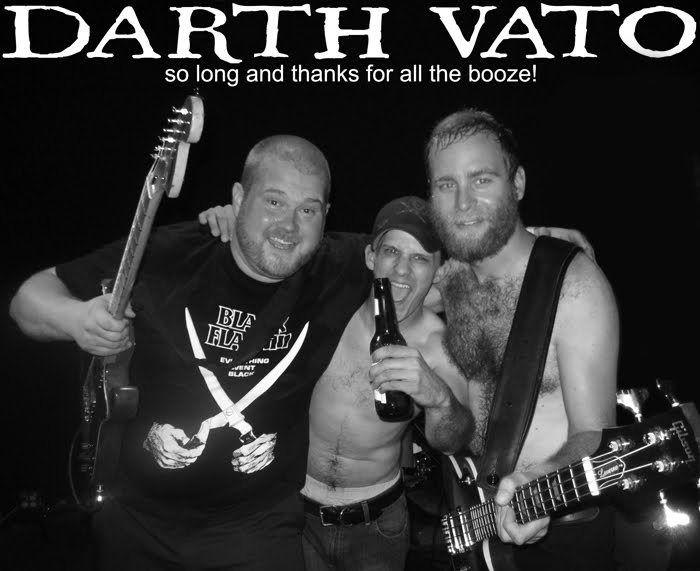 There comes a time when a band has just come to a conclusion to call it quits because they feel as though there is no other choice. To be honest I think like that about the site all the time. Darth Vato is one of those bands that should have never disbanded. A "Do It Yourself" attitude and busting your ass for 7 years mentality just wasn't enough in this industry. When I first saw Darth Vato I said to myself this band is going to make it big and deserve to. In my eyes they still are big but to the scene it just didn't happen. There were not many sites out there that could have pumped them but the classic Sublime Archive is how I found the band and was a fan since. Others ones just didnt give them a chance and I never understood why, which is a major reason why I started MusicBailout, to help get bands like Darth Vato out there. I arrived a little late. Recently I caught up with Darth Vato to ask them about their time as a band and why the chose to end it.

For those unfamiliar with Darth Vato please give our readers a little background of the band.

Steve: DV came about in 2002 because Kerry and I wanted to play Sublime covers at a bar. We asked Eric to join because he was the best drummer we knew, and he said yes because he wanted a side project. Seven years, four records (two full-lengths and two Eps), three vans and two tours later, his side project turned out to be pretty popular.

Eric: "Vans breaking down, owing people money all the time, being 25 and stupid, trying to balance full-time real jobs and weekends of buffoonery, perpetual fighting about dumb stuff, etc… "Darth Vato was originally started by Kerry and Steve with several different drummers. They approached me in 2002, and I said I would do it. Over time, we started playing shows, and did an EP, released a sticker and a shirt, and before we knew it, there was a growing local fan base. After doing a full-length, and a west coast tour, we noticed our fans were becoming more and more widespread. We realized that we had something, other than crabs or herpes, and we had a lot of fun doing it. Over 7 years, we did our best to revitalize the punk/ska/reggae thing, and even put our own stamp on the genre, while continuously being surprised at what our music meant to so many people. It really was something special.Kerry: We started playing in 2002. And then we got older along the way.

So I have noticed Darth Vato is slowly putting on a few shows here and there. Does this mean a full reuniting or just temporary?

Steve: We'll play every couple of months for fun, and we're working on new material, because a lot of those old songs don't carry the same personal resonance for us that they used to. We're not going to play out of town or anything like that, but we miss playing live shows.

Eric: I think that we all still really enjoy playing our music, and for some reason, people still really enjoy listening to it...not to mention seeing us make asses of ourselves on stage. Buffoonery is a BIG part of our live show, and our friendship for that matter. I think that we will continue to do shows here and there just to remain sharp (relative term). I am super busy with my full time band, drumming for Jamie Richards, so it makes it difficult. However, we are trying to find a way to do a show every month or so.

Kerry: I’m not sure. It’s tougher and tougher to get schedules to line up these days. I am hoping that we can play every once in a while.

What were the biggest reasons you guys called it quits in 2009?

Steve: We weren't really having fun, and it felt like the best time to move on while we were all still friends. The last album is our strongest work, but there was a lot of tension and frustration that went into it. The lyrics and sound are darker, heavier and more mature, reflective of where we were as people at the time. Then 2008 rolled around; I had a rough year, and Kerry had a really rough year, and we figured it was time to cut our losses. Not to mention that we went through three vans that year. When the third one quit on the way to Austin, that was the writing on the wall for me.

Eric: I think that there was just a staleness to the whole thing. I don't know how or why that happened, but it did happen. Our last record, although we really believed in that album as being the most accurate representation of our sound, didn't do as well as we had hoped. Plus, I think Steve wanted to move back to Lodi, and Kerry had family on his mind. I think we all just needed a break, and it came in the form of a disbanding. I always knew we would do more shows, though. You don't do something for 7 years at the level we did, and just hang it up. There will always be a Darth Vato as long as these 3 guys have any say.

Kerry: I wanted to start a family, and at the time I think we were all ready to move on. In some ways, I felt like we did it like Seinfeld: quit while we were on top. Well, we weren’t really on top of anything. It’s not like we were the best band in town or anything, but you know what I mean.

What have you been up to since the last show?

Steve: I play in a doom metal band called Vorvon as well as a “Texas space rock” band called EPIC RUINS with about nine other dudes from Fort Worth.

Eric: Since the last show, I have been busy on the road with Jamie pretty much every weekend. I also got engaged to my lovely lady, Kelly.

Kerry: Well, I made a baby with my wife. Now I gotta take care of her. And that is tough work. Just ask my wife. She does all the work.