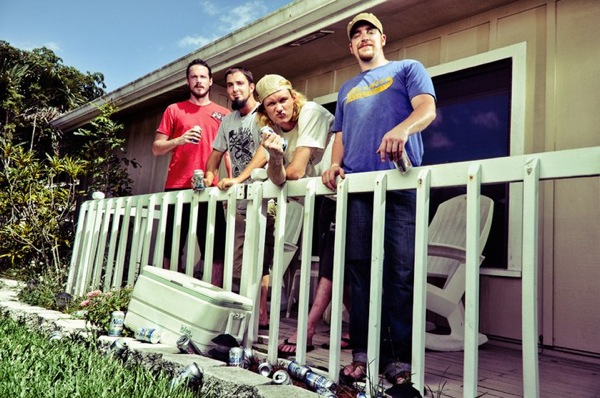 The new tunes you guys have been releasing are excellent. When can we expect a new release that these songs may show up on and can we get any exclusives on an album title?

Thanks! We’ll be working in the studio over the winter. Looking forward to having something out by the spring. I hate to try and put and put a date on releases. Schedules are always changing and you never really know what ‘s gonna happen. "Even after 8 hours in the van and hungover, we can still find the energy to rock another show. It’s all from doing this so long."

No album titles yet. I’ve always had a few floating around in my head, but we’ll probably wait and see how the album feels as it comes along. You do not see many guests on albums in this scene. Can we maybe expect that on the next album? If so who would you like to collaborate with if it happens?

We’ve had guests on certain songs in the past. We had a horn section from our friends’ band Case of the Mondays come down and play on “Fear of Rejection”. That was on the independent pressing of “Cheers!”. Also had kid play steel drums on “Somewhere Tropical”.

We’ve had people join us on stage, that’s a lot of fun. On our 2008 Fall Tour, we teamed up with The Dirty Heads for a few weeks and Dirty J used to rap on our song called “Groove Rock” and then I would sing on “Stand Tall” or “Neighborhood”. I usually join The B Foundation on “Bellyfloppin’” and The Mike Pinto Band’s “Backburner”.

I think fans enjoy seeing that stuff. Makes the show more intimate and also shows the respect between the artists. As for album guests, I haven’t ever given it much thought. Most of our tunes haven’t really called for it. It’s not out of the question though.

Howi, I know how much of a fan you are of Green Day. Have there been any attempts to try and get on a tour with them?

Wow, those guys are on such a different level. They’re not as accessible as a band like 311, Pepper, or Stoopid. Not saying we would never try, but we’d have to be doing some pretty big shit to get on a tour like that. I would die insanely happy if that ever happened.

Ballyhoo! And The B Foundation seems to tour together at least once a year. As a big fan this is always welcome in my city. How did these two bands originally meet?

We love those guys! Yeah, Jason and I started talking on the phone periodically in 2007. We were on opposite coasts but we could see each other coming up. It was pretty much a no-brainer to hook up a tour. One of the biggest and best things a band can do is find another band from a completely different area that compliments your sound and swap shows to help each other break into new markets.

Anyway, we did the 2008 Surf Roots Tour which was like 9 weeks long. We ended becoming really good friends. We even call each other just to talk like a bunch of chicks. Ha ha. 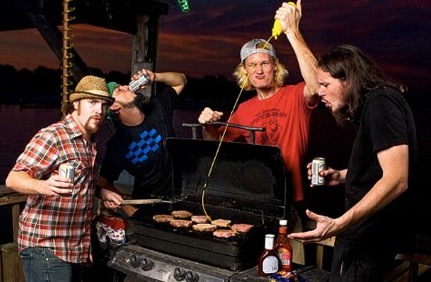 Both of you guys were on the Ehh Brah Party tour with The Supervillains. What is the preparation like for your lungs and liver for a tour like that?

We’ve been conditioned for a while now. Constant touring really whips you into shape, if I may. Definitely unhealthy, but if you’re talking about keeping up with the other bands, we can hold our own. There’s a certain way to pace yourself to stay in the game. Ha ha. Although, usually once the show is over and get to an after party or something, I’m done drinking and go pass out somewhere.

Even after 8 hours in the van and hungover, we can still find the energy to rock another show. It’s all from doing this so long.

Which stop on the tour are you most excited about?

Denver is always a great time. So is Santa Cruz. And Florida.

Who will be the first of all three bands to pass out heavily drunk?

Smoking device of choice while out on the tour?

Back to the interview

With the fact that all 3 bands know each other well, especially Ballyhoo and The B Foundation, do pranks ever enter into the daily routines on these kinds of tours? 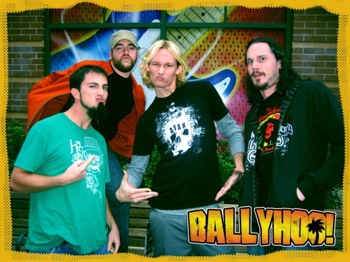 Your most recent release titled “Cheers” was put out two different times. What was the reason for this?

Surfdog Records from San Diego checked us out and wanted to re-release it. We thought it would be great to have an album in stores for people to see on the shelves. Fans went and bought it again, it was definitely nice to hit a record store somewhere in the US and see it there between Bad Company and Christina Aguilera